This must be one of the coolest, most unusual and least visited abandoned places of the Crimea. Blogger aquatek-filips, the author of these photos himself, got there by chance but he didn’t regret at all.

The lunar station that used to be secret is decaying now and obviously its time is almost over. Solid or dusty? This question was one of the most important in the space science of the early 1960s and it was asked in respect to the moon.

Soviet Union was seriously working on its lunar program hoping to be the first country that would send a spacecraft to the Moon. But nobody knew what kind of surface the moon had, two main hypotheses existed: according to the first the Moon was covered with a layer of loose space dust, as per the second it was solid.

As part of the Soviet lunar program in 1964 they created an artificial Moon – on top of Balaly-Kai appeared the lunar station, radiotelescope at its foot. They helped to find out that the surface of the Moon was solid and people could actually land on it.

The station was subsequently used to determine temperatures of Jupiter and objects of Cassiopeia, Taurus, Cygnus, to explore the surface of the Mars, Jupiter, Mercury.

The abandoned station is seen from afar and people come up with different versions of what it might be – repeater station, ski-lift, part of unfinished power transmission line pole… and even remains of Noah’s Ark (it seems to be crazy, but some people truly believe this!).

In point of fact the station belonged to the science and research radiophysical institute of Gorky, its mounting began in 1964. The project was actually experimental. The place for the station was chosen for a reason. They needed a special kind of landscape – the artificial moon had to be high above the horizon, just like the real one.

They carried out experiments daily within several months.

he artificial moon was represented by the black disc five meters wide in diameter, its surface covered with foamed carbon radio absorber. The station could precisely determine the parameters and the composition of the lunar soil. It became obvious that the temperature of the Moon was conditioned by disintegration of radioactive elements (uranium, thorium and potassium) in its depths. The artificial Moon was further used for measuring effective temperature of distributed radio waves of the galaxy.

At the distance of 550 meters from the artificial Moon was mounted a radiotelescope that sent waves to the disc and to the real Moon. What remained of it is only the foundation. This is how the unit looked like in its best time, the 60s. Because it is located on the territory of the Karadagsky nature reserve it still has not been fully scrapped. The highest elevation of the station is 391 meters above the sea level. The stairs leading to the top are very rusty today. The platform down the beams that serve to support the disc is small. It is covered with half-rotten wood logs and planks. The structure still stands but it’s not safe to be on it. Time has no mercy. Some tension wires are still functioning. The dying manmade object in the background of incredibly beautiful landscapes. Views of Karadag and neighboring valleys. Beneath are vineyards, the Black Sea, Karadag nature reserve and some structures, where the telescope was located together with lab trailers. Remains of steel structures: some cables are already corroded and broken. One of the beams, on which the disc of the artificial Moon was hanging. The aperture where the disc was located. The artificial moon was covered with graphite plates. 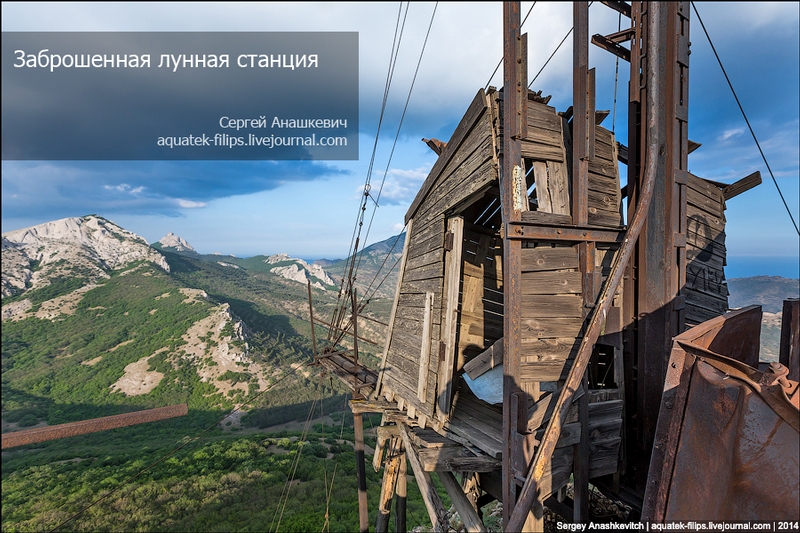 Thanks to aquatek-filips for sharing these photos and the story!