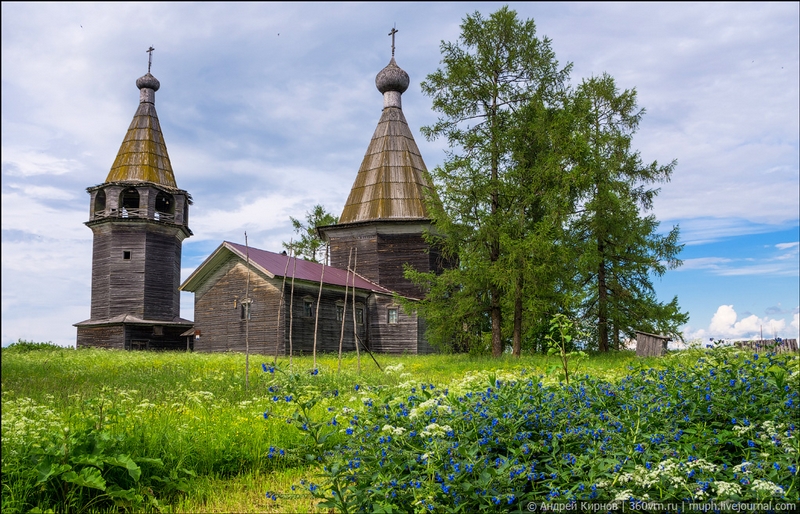 This is the Russian north, the Arkhangelsk Region, where asphalted roads are not typical. According to blogger muph, it is always nice to be there.

The Oshevensky tract stretches from Kargopol to Oshevensk. Kargopol is a big city (compared to others in the north), while Oshevensk is actually a bunch of villages united under the same title – Oshevenskoye. This place is undoubtedly another treasure of genuine beauty of Russian nature and old Russian architecture at its best. Local people are very hospitable, they treat guests to the amazing dishes of Kargopol. The guests are eating to the full and listening to exciting stories about life in this place today and in previous times. The dinner for the guests: Russian vegetable soup on bone, baked rice porridge, millet porridge – both with thick milk, omelet, cottage cheese that actually looks like cheese, fish pie (they said the pike had been caught on a silver hook), home-made bread from the Russian stove, sour cream cakes (made from sugar, sour cream and wheat flour), nastoika (drink) from gooseberries and raisins (sugar and yeast free), drink made from honey and cranberry + redcurrant wine. It is actually hard to move after eating all that, but we have to see the local architecture… This church was built in 1787. This metal door did not save the church from two thieves – twenty old icons were stolen. Guest house for those who intend to visit the local museum. The Monastery of Alexander of Oshevensk – it’s the only one preserved near Kargopol. The monastery was founded in the 1460s. Locals say that the monastery is inhabited by one hieromonk. In the picture above is the main structure of the monastery (1707) or its ruins… Locals believe that this stone with a footprint of Alexander Oshevensky himself may heal them from diseases. Once it broke the bucket of a bulldozer that was trying to remove it. Ceiling in the church. Unfinished bridge over the Onega river… Luckily they have this one – an unbelievable structure! The Church of Paraskeva Pyatnitsa (1805). Next destination is Vershinina – a place in the local natural park, but that’s a different story…