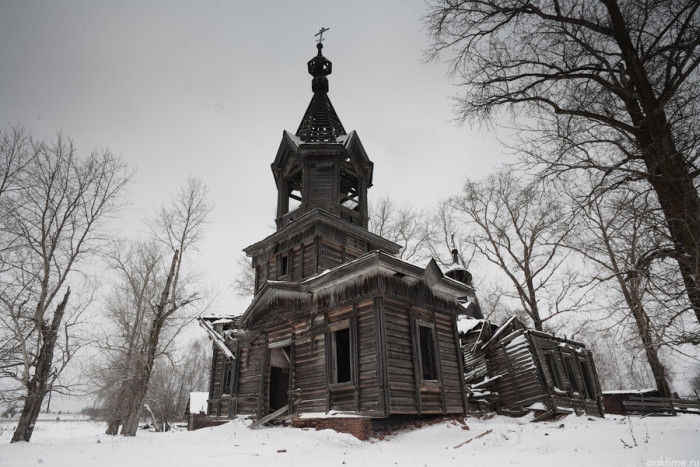 In Russia there are multitudes of abandoned villages. Most of them have the monuments of a long gone era. One Russian blogger traveled to some of them recently and this post is what he brought back from the journey. We start with a wooden church. Despite it looks it’s not that old.  It was completed in 1910. Then communists turned it into warehouse in 1940  – as they did with many churches that were not blown up. He first went to Udmurtia, Russia. It has plenty of abandoned villages. You can’t find the traces of human beings in some. Maybe some people come back here in summer.  Maybe hunters stop here while on their journeys thru the Russian woods. Maybe shepherds from other villages. It’s over 7 km to the next village from here so its not that far from civilization. This was a village hospital. And then he arrived in the Yaroslavl region. This is a freshly dumped village. In 2008 there were still people living here. Now however its completely abandoned. Houses are pretty large and well-built. Every house has its backyard which includes sauna, storage house, barns for animals. Houses often have nicely cut elements and inside and many old things are left, like wooden trunks, barrels, old Russian wooden furniture. In the middle of the village there is an old water well decorated with wood carvings. Next to it there is a modern payphone which seems to be off line. No use now in an abandoned village. Photos of the previous home owners. Then he went to Kostroma region. And then to Arkhangelsk abandoned villages. This village previously was huge. It was even mentioned in ancient Russian history. So even now its fully abandoned. An impressive number of houses are in it. ..and a payphone! Look how tall the grass around it – nobody seems to approach it any more. Sometimes there are true architectural  masterpieces in abandoned villages. Sadly the photos were submitted without a link to the author, so if we get in contact with him we’ll update the link to his website!

1 thought on “Abandoned Russian Villages in 2015”