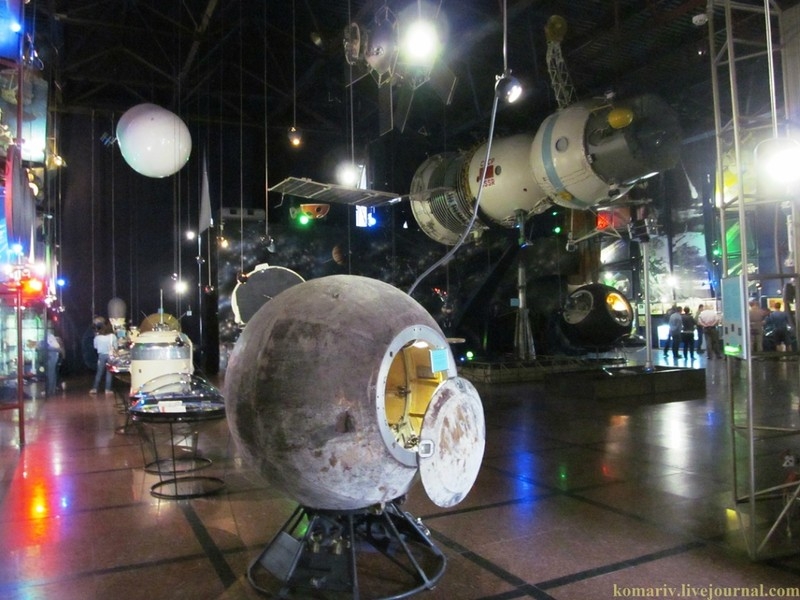 This is a small but rather interesting exposition in the Museum of Cosmonautics in Zhitomir, Ukraine. Basically, now Ukraine is a country without its own space program, so it’s a Museum of Soviet Cosmonautics rather than of just Ukrainian Cosmonautics (which is non-existent). Why then Zhitomir? Because it’s the birthplace of the “father of Soviet Russian cosmonautics” – Sergei Korolev, creator of the first Soviet rockets including the one which first took man into space. Thanks to the blogger Komariv we have a chance to see the exposition now!

In the first photo on top you can see the ascent module of geo-physical rocket P-5B. “Soyuz” and “Dnepr” Russian space rockets but basically those were just the army missiles R-7A and R-36M modified to suit cosmos exploration needs.. Here is a human for scale. Pretty big machine it was! This Soyuz is suspended from the ceiling. On the right – barely seen in silver is a Vostok space rocket model – the one which took Gagarin into space. For some reason parts of exposition are not properly lit up. Here it is with a Gagarin mock figure inside. It was very tight inside, and as you see no screens were present at time, he couldn’t kill time watching something or playing – he had to watch just rough number scales and a rotating globe for hours on end! Here is one seat – another is on the left. Also very tight! Basically that’s all! Thanks to Komariv again for the photos!