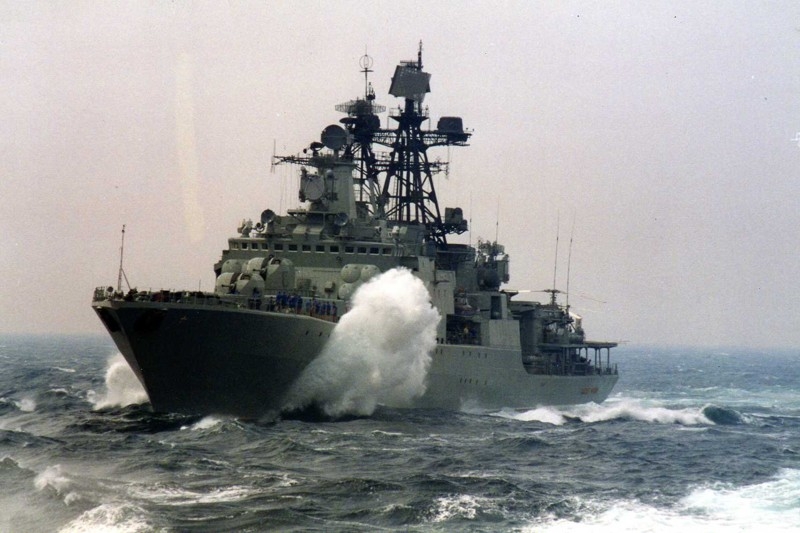 As is being reported in Russian media, there are currently over twenty Russian warships and battleships in theÂ Mediterranean Sea. Most of these have already relocated to theÂ Eastern endÂ – close toÂ where Syria is, and probably heading to that country. Here is the whole list and description of the armada in action. First one is a Udaloy-class destroyer “Admiral Panteleev”. It was used in 2009Â by Russian forces against Somali pirates. Then it was stationedÂ in the Russian Pacific coast. Then, after the Syrian situation started getting worse, they ordered it to theÂ Mediterranean. A Neustrashimy-class frigate with the same name “Neustrashimy”. It came to the Mediterranean from the Gulf of Aden. A “Peresvet” ship.Â These areÂ Â “landing” ships – they carryÂ soldiers on board and take them to wherever they need to beÂ deploy, whenever they areÂ needed. And one more – “Novocherkassk”. Lots of landing ships. And an oil or diesel tanker “Yelna”. Because army needs resources. And a “floating workshop” – repair and maintenance team and ship. But that’s not it! Here isÂ Vice-Admiral Kulakov, an Udaloy-class destroyer of the Russian Navy. It leaves the Atlantic now for the Eastern Mediterranean. And there is even more. Here isÂ Moskva (Moskva is the Russian name for the city of Moscow, ex-Slava, which means “Glory”). It is the lead ship of the Project 1164 Atlant class of guided missile cruisers in the Russian Navy. It also leaves the Atlantic now and enters the Mediterranean. And there are still some more!Â The Project 1241 is a class of Soviet missile corvettes. It hasÂ the NATO reporting name “Tarantul”. It also leaves the Atlantic Ocean now and enters the Mediterranean to go to its Eastern region. Expected date of arrival – September 29th. And one more ship is expected on 9/29.
That’s all for now, but not all that are expected to arrive between now andÂ the end of this year. A few more, namely five more ships – some of them listed below, are going to join the Armada in the next couple of months. What do you thinkÂ is going to happen?

7 thoughts on “22 Russian Warships on Their Route to Syria”