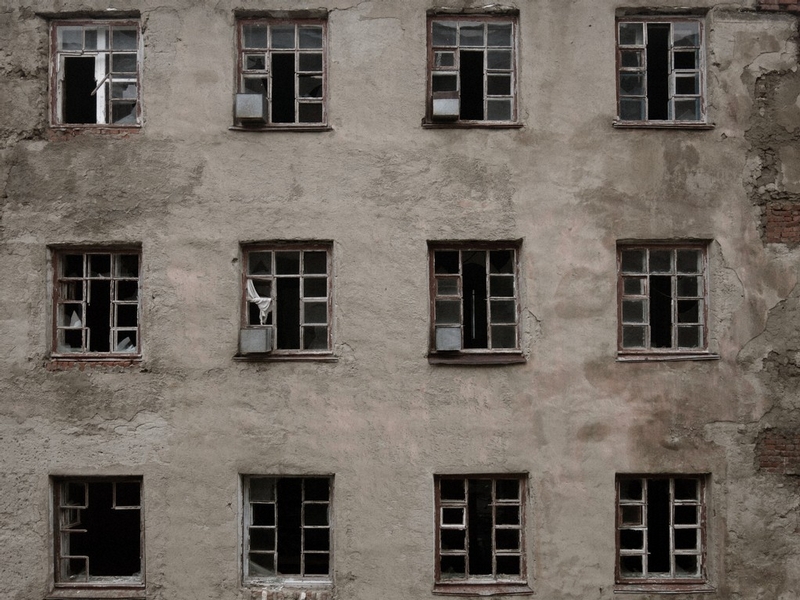 Gudym is a lost town on Chukotka Russia. Chukotka is a peninsula close to Alaska, just 90 km across the Bering straight from the USA. There are not many points of interest on Chukotka, says Evgenij, the photographer, and many people come to Chukotka to see the abandoned Soviet town of Gudym. There are already multiple urban legends about the town and its vast underground buildings.  Russian people often get the feeling of loss of greatness of Soviet Times. Let’s see what Gudym is all about. Gudym is an example of how cities would decay if left to go one on one with nature. First you arrive at the village of Slava which is 7 km away from Gudym, it is also abandoned. It was actually abandoned even before the army left Gudym. This pillbox covers the entrance into the city. There are also trenches. Wooden buildings are skewed and stuck in swamps. The view of Gudym from a nearby hill. On the hill foot you can see bunkers which were used for storing nuclear projectiles. Most of the buildings in Gudym are wooden. Surprisingly they have withstood the assaults of nature much better than the concrete or stone ones. However they can’t survive the fires which happen here from time to time thanks to careless tourists. Locals say that nature started to attack about five years after the army left the town. Concrete slabs lose their fight with grass, bushes and trees with each passing year. Some wooden storage sheds start to tilt and fall over with time. This was a school building. And this was a local shopping mall. And this wooden library. It’s still standing but the stairs have collapsed. It’s not only nature that devastates the town. People help too. Scrap metal hunters appeared here some time ago and like this building they demolished the roof and walls to get into the diesel generators room to steal the generators. Roads collapse faster than anything. Cracks appear as holes form underground and the roadway crumbles away. A few of these houses are still available to live in. Because of the huge temperature fluctuations metal structures also deform. Thanks a lot to Evgeny for his trip!

9 thoughts on “Forgotten Town of Gudym”