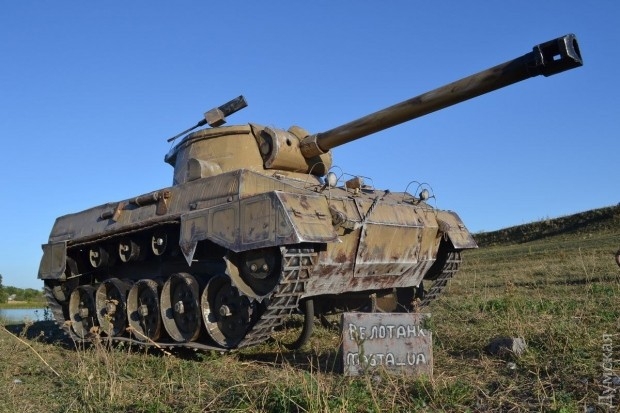 Do you see a tank? It looks like the real thing, huh? But in reality it is not! It is made out of paper and two bicycles! Let’s see what it looks like up close, see how it has been built and find out if it can move or not! This photo is even better, it looks real in this photo! But.. it is not a tank, it’s two bicycles and a paper frame on them. If you look very closely in the middle, you will be able to see two bicycle wheels peeking out! Now we can see even more detail! It’s all cardboard, wooden planks and bicycles. The guy works as an artist and a tattoo artist so he has some skills! The tank is pretty much a moving model! And it’s a copy of an American M-18 self propelled cannon! And here is how it was built. At first it didn’t look much like the real thing.. The canon was made from a PVC pipe! And those are the fake wheels – also pvc and cardboard. Look, it’s so light that it can even go over a cat and it doesn’t hurt it! Inside it’s not that cool looking, and pretty dull! Also to prove his affection for tanks he made this body art of a tank on his girlfriend! Way to go, Sergei!

1 thought on “Guy Builds a Tank from a Bicycle”