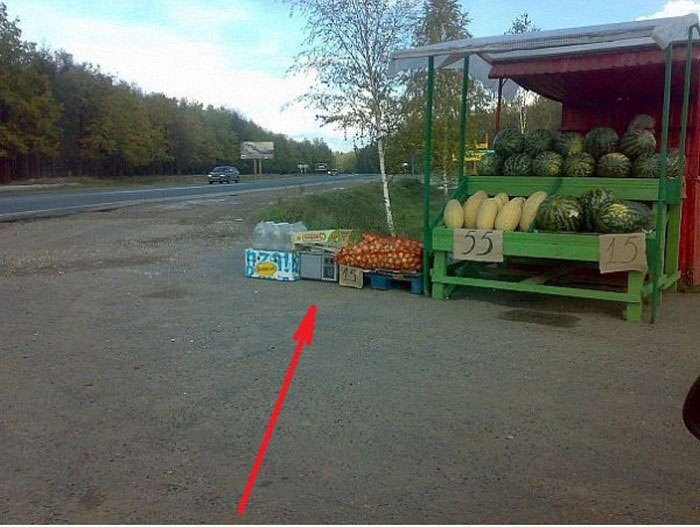 Russian road police used to use their patrol cars to catch drivers speeding on the highways. However as their equipment advanced in sophistication and ability, their masquerading skills became more advanced, too. Now they place the autonomous cameras capable of taking a photo of a speeding car in totally random places across the highway’s shoulders, then they park a few miles down the road and get the signals and photos from the cameras onto their laptop so they just stop the approaching cars that have been speeding and fine them. Each time they place the camera in random spot so that it can’tÂ be tracked or its position predicted. Here are a few examples. The first one shows how the roadside merchant helps the police to hide their cam amongstÂ their stack of fruit and veggies. A tree and a camouflageÂ net can be used, too. Then a trash bag is a good way to hide your road camera. Or a trash bin standing in someone’s driveway. Also on the back of the road sign. This sign in Russia means “no speed restrictions in force now”, meaning that drivers can start moving faster after being slowed down by a previous speed control sign. But ifÂ they press the gas pedal in advance ofÂ passing the sign, the camera snaps them and sends the photo to the waitingÂ patrol car. If you ever travel to Russia be careful not to speed as the cameras can be virtually anywhere and no signsÂ are posted to warn you that speed measurements are in process.