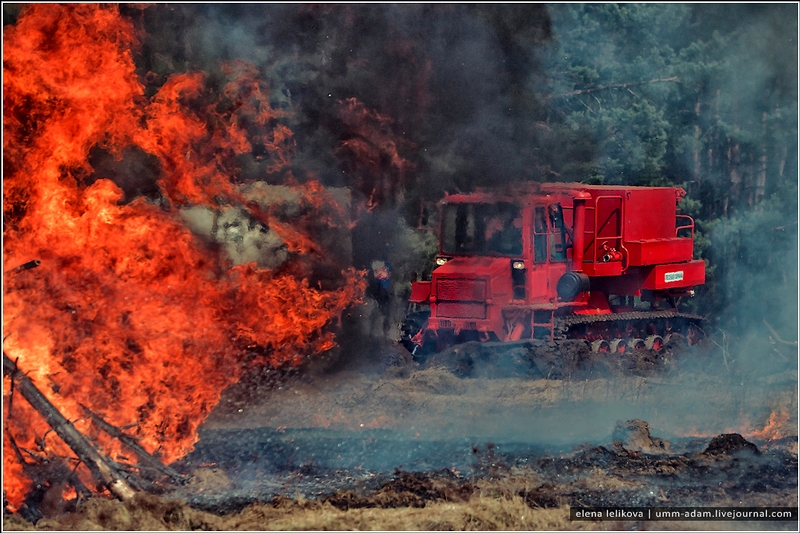 Elena, the reporter says that this year forest fires started way to early and she contacted the authorities to hear their forecast on the possible situation with fires. They told her it won’t be as in 2010 (the year when Moscow was covered with thick smog of forest fires and people were advised to keep windows tightly shut, no matter its +35 C outside). To prove they really mean it – no huge fires this year – they showed her a few of the novelties Moscow firefighters are going to use, including this fire fighting tank which we now, thanks to Elena, can see too. It has absolutely zero obstacles – can pass anywhere, except probably a deep swamp. Can go into the trenches over half meter deep or climb the walls of half meter high. It can scrap and rake even while fire is still burning. Fire doesn’t damage it. It makes a dirt lane of three meter wide to stop the fire spread. But its not the coolest about the Dragon. The Dragon carries eight tons of water (or foam emulsion). It’s like as much as four Russian fire trucks can carry. And all this being operated by two men – a firefighter and the driver. Elena says the Dragon has only one downfall – its very heavy – 26 tons (8 of which is water weight). That’s why its better should be kept off the swamps. And here is the cockpit. The steering is like on the plane and this heavy monster can go as fast as 25 km/h.

Thanks to Elena for such a nice report!

4 thoughts on “A Firefighters Tank Called The Dragon”