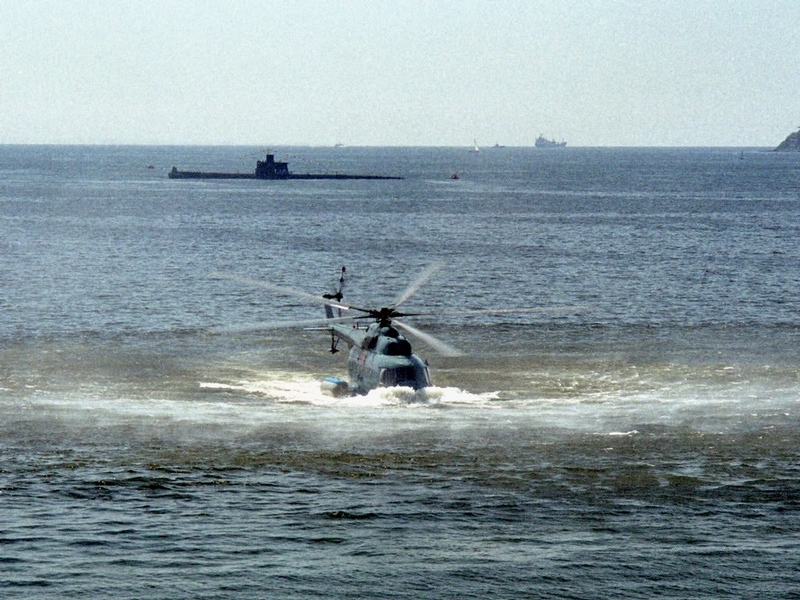 Previously I even didn’t know that such thing as amphibious helicopter exist at all. However, it seems that there is and a great example of this is a Russian (Soviet) amphibious helicopter MI-14 which could land on water, carry deep sea bombs and torpedoes and was used to hunt submarines. They say it was so powerful that in 1990s after USSR collapse America has pressed Yeltsin administration to take this helicopter of production in Russia as it was a real danger to the NATO navy and so they stopped the production. However it has been announced that now the production of this machine is being resumed again, some twenty years after. So lets read on and see what this wonder aircraft was all about? Basically, it was not a Soviet idea to use helicopters to fight submarines. Americans started using Sikorsky R-4 to patrol their waters and Germans had ultra light helicopter Fl 282 for similar purposes.

Then, during the Cold War both sides of the conflict were racing in development of more sophisticated helicopters to monitor the deep sea in search of submarines. And Russians have taken their basic helicopter MI-8 and converted it into a flying boat – its lower part has got the boat shaped profile. Thanks to this shape it could float nicely and  could withstand storm up to 3-4 numbers of Beaufort scale. The first MI-14 took flight in 1973. It got equipped with whole range of Soviet anti-boat equipment as well as anti-submarine bombs.

It could carry atomic bombs also. The “Scalp” atomic bomb was designed to deep sea use  with power up to 1000 kilos of TNT equivalent which could “strip” the enemy submarine up to 1km away.

Here you can see a short Soviet video translated in English about this unique aircraft: First tests of the helicopter were not so successful. Once it got even overthrown, but the crew escaped and survived.

This helicopter could stay in the air for up to 5.5 hours! Or could travel as far as 1100 km at once. So it could patrol the coastline for a few hours in search of enemy submarines. Pilots liked it a lot for a comfortable cabin and lower vibrational profile – they had to spend hours in it at night while patrolling the sea waters and were thankful to the engineers for the design. However, as I mentioned before, they had to take it off production in 1992. The chief engineer of MI bureau is sure that this was made under an US pressure. “Once this helicopter has cornered an alien submarine in Soviet Arctic waters in 1988. We just were not brave enough to give an order to attack it and drown.” says he in his interview “since then they started pressing us to shut down this program, as it was real danger for their u-boats – it was the best way to detect any submarine, including the ones with low noise characteristics”. However, these days Russia got new plans in Arctics connected with continental shelf oil drilling and other projects and they want MI-14 both for civil and army use. However some engineers think it won’t be a trip to Disneyland to resume the production – many of the documents were lost as well as many of the qualified engineers have left the country or too old now. Some critics say that the plan to resume MI-14 production also might show that current Russian aircraft construction industry can’t produce nothing new because of lost experience and qualification so they have to revert to old Soviet models.  However, others say that it’s useless and stupid to conceive new models with using the old technology: “Look at Boeing 737 from the sixties and now – it’s the same plane only visually, however a constant evolution of technologies transformed the plane a lot. So we also shouldn’t invent a bicycle but just use the past experience in constructing a new type of helicopters”.