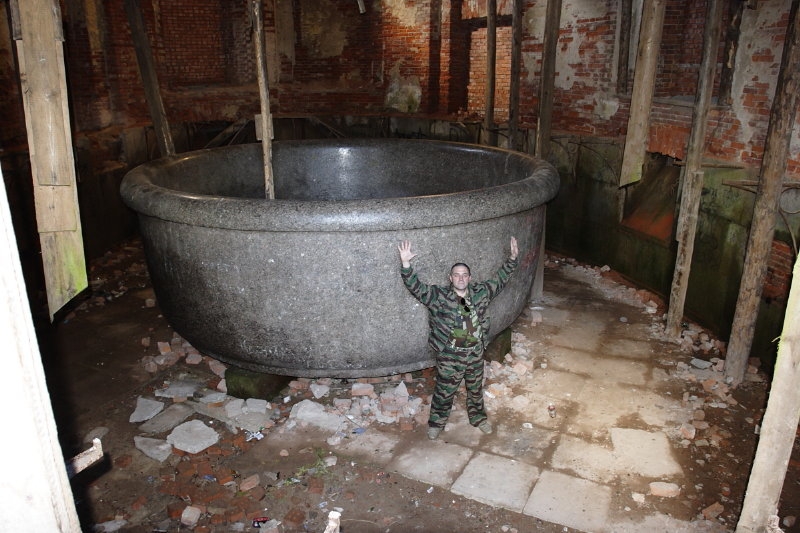 The King Tub is a unique creation of Russian masters located in Tsarskoye Selo of Saint-Petersburg. It is also called “the Bathtub of the Russian Empire” or “The Granite Masterpiece” and even “The Eight Wonder of the World”. The tub is in Bavolovskiy park which does not have much of interest apart from this. The tub is hidden inside an octagonal tower, it represents a massive granite bowl or a huge monolithic pool carved from a single gigantic piece of red granite, its height is about two meters, diameter – over five meters. The stone palace itself was built in 1785 to replace the old wood mansion. The architect made it look rather gothic. There is a pond at the palace, the the saparate building used as a kitchen was destroyed by enemy shells in 1941. Some white willows growing here are more than 150 years old. Alexander I, grandson of Catherine II, was rumored to like this place and use it for intimate dates, he replanned the palace and ordered the huge granite tub made. The unique pool was big enough to be filled with 8000 pails of water (twelve tons), it was made by a famous stone cutter Samson Sukhanov who participated in creation of the monument to Minin and Pozharskiy in Moscow.

They brought a huge 160-tonned block of granite to the place from a Finnish island and it was being polished for ten years (1818-1828). The weight of the tub is 48 tons. The walls were built around the tub when it was finished. One could get into the tub by the cast-iron staircase provided with viewing platforms. It’s amazing but the walls of the tub are rather thin, only 45 cm, it is the minimum thickness to withstand the multi-ton mass of water. The Babolovskiy Palace seriously suffered during WWII, only this tub, which is almost 200 years old already, has been perfectly preserved. The Germans intended to take it to their country as a rare exhibit but never did. 7 thoughts on “If I Were a King I Would Wash In a Bath Like This!”