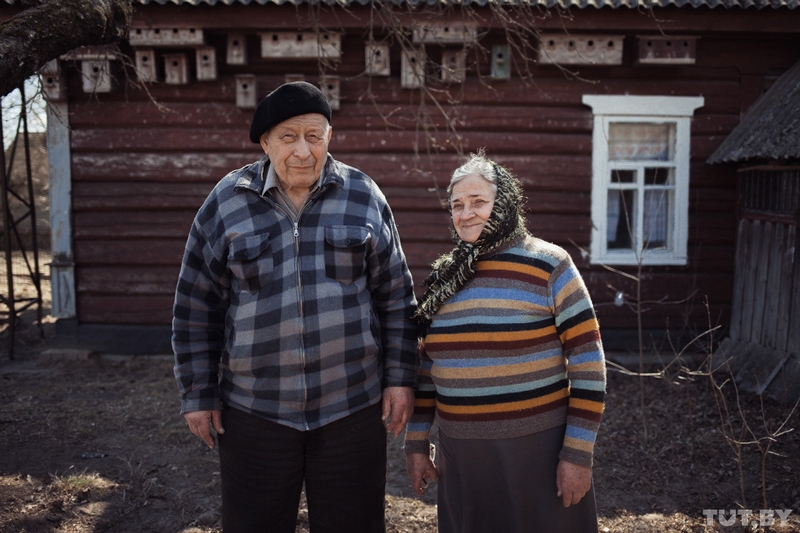 This couple managed to “survive” the war, the Chernobyl radiation and Stalin. They are the keepers of the final compound in the resettled village.

Nikolay is making bird houses and hanging them everywhere, he knows which birds will come soon and which ones never returned after the explosion at the Chernobyl NPP. Nikolay is 80, Sofia is 76. They have been married for 56 years. They live in Rudne-Dudichskaya village, Gomel region, that was bulldozed and buried last year. Contamination level here is 15-40 Ci.

Since 1986 until 1991 clean up crews were working in local villages, but people were still living there, adults were working, children going to school… Nikolay had been working at a local communication center for 40 years. Sofia is cooking potatoes she has grown on her land. She has to regularly remove ash from the furnace as wood accumulates much radiation. Many people left the place to be given new flats elsewhere. Some elderly people who stayed died just a couple of years before their move because of depression.


The last of their neighbours left two years ago and died last year in Gomel. The radiation background here in the front yard is almost normal – 0, 022 mcR/h. But when they go closer to the wild grass the situation rapidly changes. They have many family portraits and icons. Here is the only church in the village. It was destroyed by the fire in 2002. They were crying when the church was destroyed. The place where St. Nicholas church was located. Remains of the church bell. They pick mushrooms and drink milk. Sofia knows some secrets how to clean foods from radiation. Postman brings them their retirement pay and newspapers once a month. Nikolay has built this booth to help his wife with washing. It has a water supply and clothes are protected from the wind. Sofia is cleaning the place where her relatives are buried. Nikolay and his aircraft. His dream was to restore the plane… 6 thoughts on “Final Residents of the Buried Village”