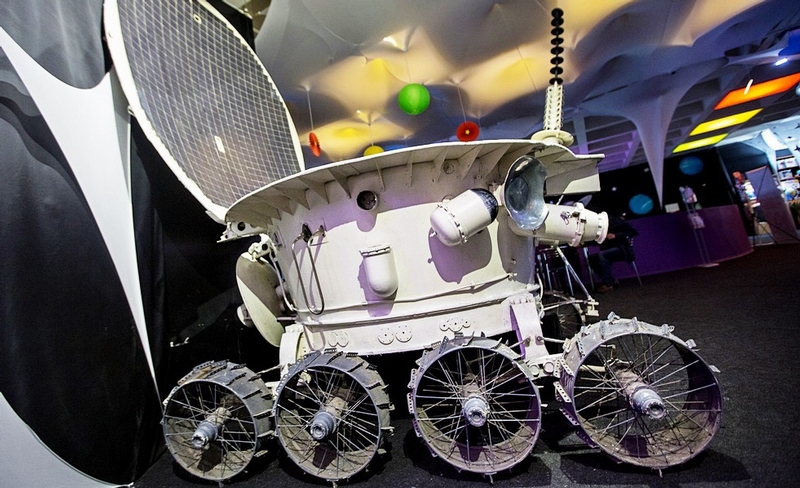 Fully autonomous Moonwalker or Lunokhod can function without refueling for a year, it has a self-repaired suspension for any type of terrain and climate control stabilizing the temperature. We could call it the transport of future but it was created in 1969. The first model had travelled its warranty mileage thrice and didn’t have a single failure. If no other intelligent life exists in the Universe this vehicle can be surely called the most reliable in the universe.

As for Amercans, they had their Lunar Rover repaired on the Moon twice. If the Soviet one would fail, there wouldn’t be anyone to fix it – the crew was 400 thousand kilometers away… The USSR chose its own way of studying other worlds. It sent a robot-researcher instead of a man to the moon. In order that robot could do everything right it needed its own vehicle. The main problem was to create a chassis. The military engineers chose an ordinary wheel and refused tracked, rolling, walking and jumping undercarriage.

It had to be universal and exclude any probability of the Lunokhod being stuck because nobody would be able to push it. It also had to be reliable on slopes. Wheels were the most efficient mover and the proper choice for Lunokhod. Besides the number of wheels could be varied if necessary.  For example to reduce the soil bearing pressure and to increase the service life of the vehicle. However they had to modify the wheel, of course. Just because not so much was known about the properties of the lunar soil. The wheel was provided with three thin titanium rims – they could easily roll along the solid surface, the mesh stretched between the rims would help on loose soil. The undercarriage was also provided with special lugs that helped to travel on loose ground under pressure   As it turned out they were required much more than it had been expected. Disks were replaced with light spokes   They provided stability and elasticity when the wheels were moving on stones. The final approved variant of the wheels was the result of multiple tests and calculations. The wheels were tested on different types of soil and even in an aircraft compartment imitating lunar gravitation.

There was a DC motor of direct current with a reduction gearbox and a squib in the thin hub of the wheel. The squib was activated remotely when the drive failed and the wheel turned from a driving into a driven one – it could simpy roll along the surface and didn’t require any interference of men.

Another serious problem was to decide how to control Lunokhod. The vehicle had a remote control and when we say remote we mean the huge distance – from the Sea of Showers on the Moon where the Soviet robot landed to the deep space communication center in the Crimea where the crew was localed (400 thousand kilometers!). The signal overcame the distance for 2,5 seconds, that was the delay time of the vehicle executing commands of the operator. But there was a more serious difficulty – the slide show on the operator’s screen was too slow. Pictures were updated once every 3-20 seconds depending on the terrain. This means when the vehicle detected an obstacle it moved on for at least eight seconds more. That’s why they never made it move faster than 2 km/h.

The lunar lighting was far from ideal as well. The situation on the “road” looked like a combination of black and white spots for the operator. When the sun was high they could not travel at all. Some help was provided by additional sensors. The work of the crew was so hard that they could not control the vehicle longer than two hours. The crew of Lunokhod consisted of five members – driver who activated the levers, navigator, engineer, high gain antenna operator, and crew commander. All these people would not fit in the vehicle anyway. Its body had a diameter of 2150 mm., it was fully occupied by scientific equipment, batteries and various systems. The batteries, by the way, could not be charged without the sun. Apart from test models of Lunokhod, it had four functioning models. The first one was Lunokhod-0, but it didn’t reach the space due to the rocket crash during the start. Lunokhod-1 overcame 10 540 meters on the Moon and performed many scientific tasks. The warranty period for the vehicle was three months but it worked for almost a year – from November 17, 1970 to September 15, 1971. It was put out of service due to the failure of the isotope heat source (everything inside the eight-wheeled robot got frozen on a cold lunar night at -150°С). Lunokhod-2 travelled 40,000 meters on the Moon and was put out of operation not because of its condition but following the meeting with an insidious crater (the heat exchanging cover was contaminated with soil). Lunokhod-3 was not even given a chance to perform its task, the Soviet lunar program was suspended. Today it is kept in a safe place. 1 thought on “Lunokhod: Most Reliable Vehicle In the Universe”