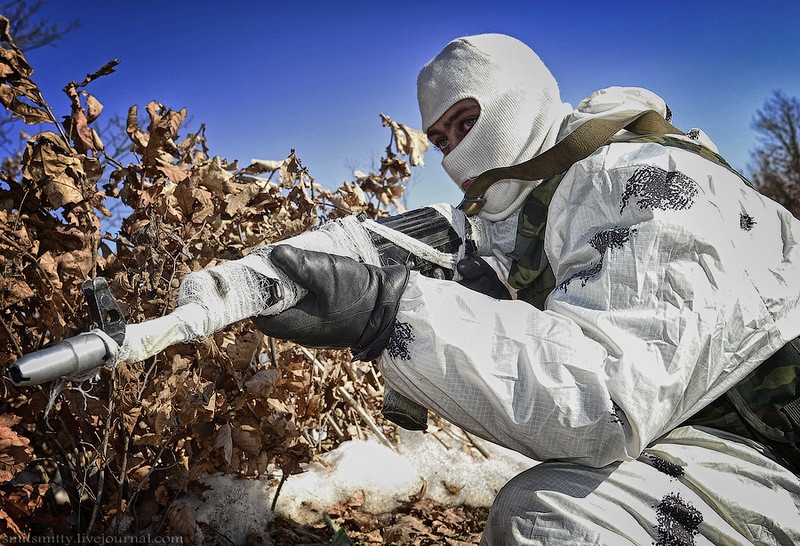 Blogger smitsmitty, whose reports from the Russian Far East we are always happy to see, shares another military photo story from Sergeevka. This time you will see how the Russian military intelligence learns combat skills and how to  survive. The winter drill was organized for 500 soldiers. The encampment of the units is held twice a year and unites soldiers from Sergeevka, Bikin, Sibirtsevo, Ussuriysk (Russian Far East). This time 30 soldiers have to act as a team in the unknown terrain. Most of them are contract soldiers. They have the following program: ambush, taking prisoners, survival in the field and firing sniper weapons. The conditions are close to realistic but the ammunition is blank. The sabottage group consisted of twenty persons. The scouts had to destroy the enemy and capture the enemy commander. Sniper at his position. The gunfight was very sudden, a grenade launcher man came from the trees and destroyed the armored vehicle. Next they had to practice sabotage actions in the rear. According to the exercise plan, an armed group was hiding in the forest dugout. The scouts were ordered to steal the secret documents. Remaining unnoticed they approached the dugout… Liquidating the guards on their way.. Finding the laptop with the required information. The guys were testing a new system, the complex of intelligence, control and communication called “Strelets” (“Sagittarius”). It helped to accurately determine their own location and the location of enemy objects. Skills to make a fire, cook food in the field and make a shelter are also a part of the training. By the way, soldiers know ten methods to make a fire.