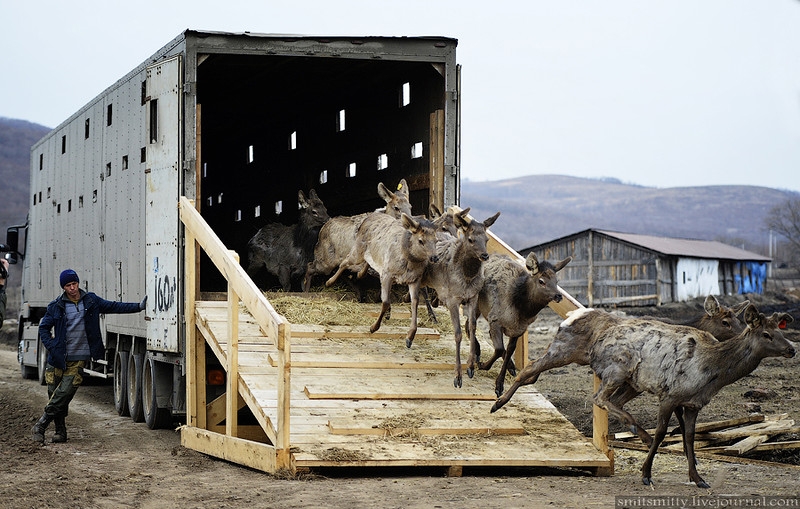 Just yesterday the Novonikolsk stud farm received 170 head of red deer from Gorny Altai. The animals shipped toÂ the farmÂ in the cattle trucks for eight days. But each of them is safe and sound. Experts expect the deer toÂ aid inÂ the production of antlers based medicines and extracts. The animalsÂ were putÂ into the cattle trucks right from the taiga and required two days for adaptation. They made several stops to feed the animals. This is not the first time a haul like this has been done.. Cows and horses have already been transported to remote distances so they have some experience and know what to do to keep the deer safe. These Volvo trucks have all necessary equipment for feeding, watering animals, manure removal. They traveled theÂ distance from the Altai Krai to Primorye in eight days. Upon arrival the animals are put into quarantine and checked for foot-and-mouth disease Â andÂ anthrax. Â They were also inoculated for it Red deer get acclimatized rather well. Now they are experiencing the molting season. Old residents of the place. Vasiliy is the very person who created the farm from nothing. They have about 500 sika deer at the farm. Their dream is to create the service of curative baths based on useful properties of red deer antlers. Today it’s available only in Altai. Such baths are said to cure many diseases and help to restore health after surgery. They also have horses, camels, boars and yaks. Thanks for the great job, smitsmitty!