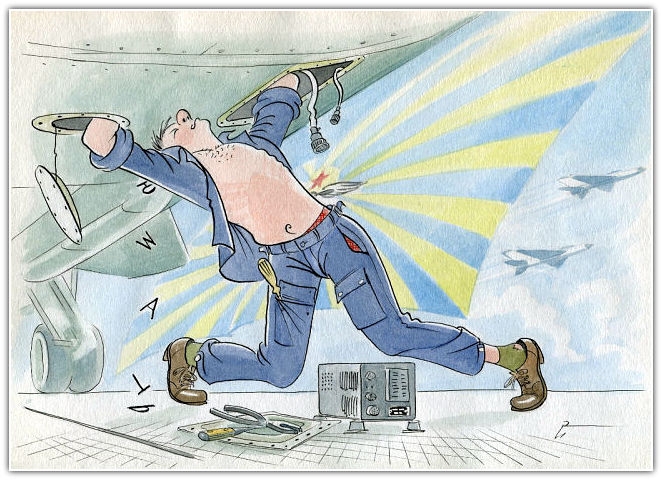 Valerie Medvedev was a Soviet air force technician servicing air force planes and jets. He finished pilot’s college in Russia but instead of being a real pilot he had to work on the ground for over eight years. Later he became a professor in one of the Soviet and then Russian air force universities. The images are pretty much awesome combining an artistic approach and the honest emotions of an officer who had to serve in the distant Russian air field during the late Soviet era. His depiction of planes is pretty much realistic and the people are more comic-like though his attention to the smallest detail – like uniforms etc is pretty much stunning. Also if you look on the top image there is a striped flag on the background – this was an official flag of the Soviet Air Force – it would be a motif on some of the further drawings you’ll see inside: “Where is that freaking screw driver??” “In my hometown its a season of apricots bloom already…”. Valerie has served in distant Northern airfield. See here is a flag again, emanating right out of the centre of attention inside of the officer’s cafeteria. As you can see from his photos officers serving on such distant airfields had to live in pretty much primitive conditions – unpaved streets, village houses, cloth string with drying cloths and kids together with chicken. Also if you look on the ground there are pieces of military airfield pavement pilots used in their own homes to cover the puddles and dirt. “We need an engineer!” Technicians are happy – no flight today because of weather.

As you figured out probably all officers including Valerie were obsessed with women. Camping with friends just a step away from the air field. Marking a special occasion – continued below: According to Soviet tradition when an officer was promoted one rank higher he got new small star to be inserted into his uniform chevrons. And to get it he had to put it first inside of the glass full of vodka – right on the bottom – then drink all the vodka and get the stars. “Whatcha doing!”. Probably he have seen something like this in his real life. Again scenes of the primitive home life – those stripes of perforated metal on the dirt, then firewood to heat the house. Water was not available in taps – officers had to walk with buckets to the nearest street dispenser. Also the small structure behind a guy is a street toilet – a hole in the ground. As Valerie puts it: “Officers had three sports to do – bring water, take out the wastes and prepare firewood”. Just imagine. Probably later they finally were transferred to more civilized place with multistoried buildings. Great thanks goes to Valeriy!