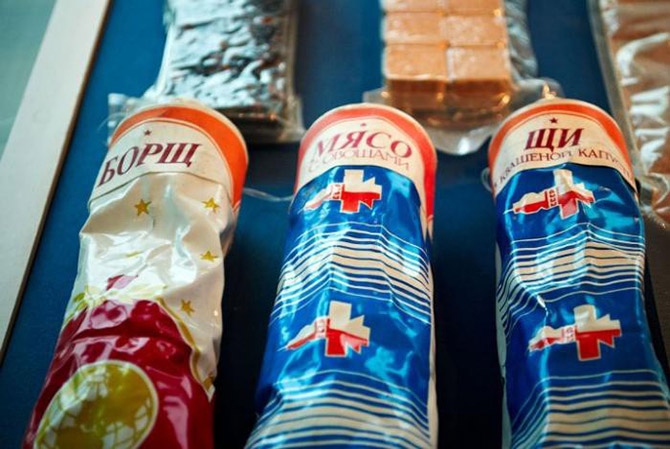 A guy has visited a museum and made a photos of the tubed food Soviet cosmonauts used to eat while orbiting the Earth. Basically, this kind of “food out of tubes” was legendary especially among kids – everyone wanted to try those, but very few actually could get a grip on the tubes as they were strictly for the cosmonauts. Here, a few photos of what actually they looked like – like the ones on top include “Borsch” “Meat with veggies” “Russian sour soup made from sauerkraut”. What else did cosmonauts eat? A lot – including a tubed vodka and coffee. Yes, even the booze was legal for them. See more inside:

Looks a lot like a toothpaste but was not. And despite the price being printed on the tubes it’s still was not very realistic to find them in stores. Those above are some dishmade of cottage cheese  and a coffee with milk.

Another sauerkraut tubed soup. It says weight is 165 gram – roughly 1/3 of a pound. Also some more stuff was in regular vacuum sealed packaging – like the bread on the left. Also in the middle you can see the tubes again.

And here is another tube design with a sealed top – this one is red color and read from inside – it has a “cranberry drink”. And here is a historical shot – USA astronauts get their treats – a tubed vodka and something else. One more ration goes together with utensils and dental flow – tubed things are ketchup and mustard. The vacuum sealed both are bread and the tins are meat products.

So basically even they had to take those in a tube form they say it tasted really great and reminded real thing a lot. I think nowadays there is another sort of packaging for the “space food” – probably something with dry-frozen goods like people take camping with themselves.