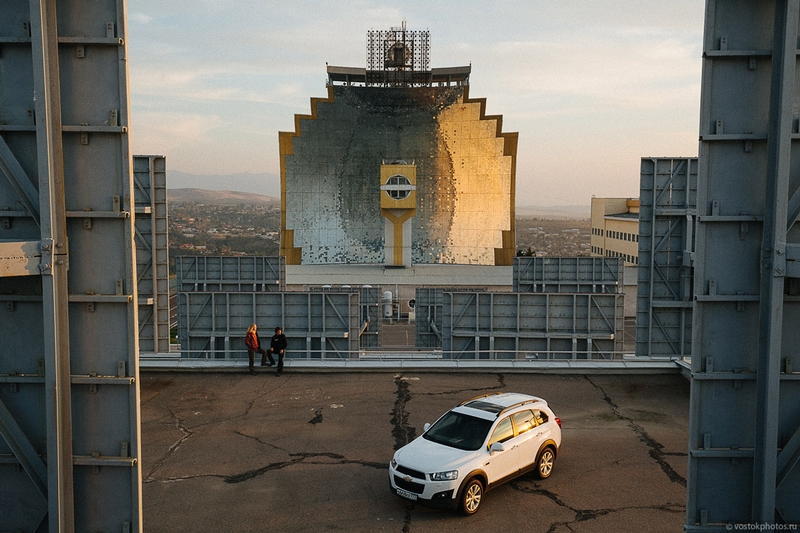 “This projected costed some crazy money and was possible to be produced only in the USSR. However, its day-to-day use was almost free – during the day the temperature inside the furnace is steady 3,000 degrees centigrade!”, says Nikolai, the blogger who went to Uzbekistan and visited this Soviet unique structure. With this furnace they were making metals melt with just Sun power. Want to see more? Thanks to Nick we can see it in detail: The main parabolic mirror is 54×54 meter large. It focuses ray of sun light of 1 meter in diameter. There are over 10700 mirror tiles in the complex. There are also sixty two more large mirrors placed in checkerboard pattern.  Each such mirror as tall as 2 storied house. They automatically track the Sun movement and the operator can control those to regulate the temperatures in the furnace – from 800 to 3000 degrees. And in the tower there is a furnace itself. This place in Uzbekistan said to have 270 sunny days in a year. Also because its high in the mountains the air is clean which helps the experiment. And around it just normal rural life. Nikolai says that when he was leaving the Uzbekistan the local KGB agent on the border demanded to delete all the photos from the camera flash storage. They said its a secret object. We don’t know how the photographer was able to restore them but thanks to Nikolai you see something pretty much secret today!

Nikolai’s site is below, thanks Nik!

17 thoughts on “Soviet Wonder of the World: The Great Solar Furnace in Uzbekistan [30 photos]”