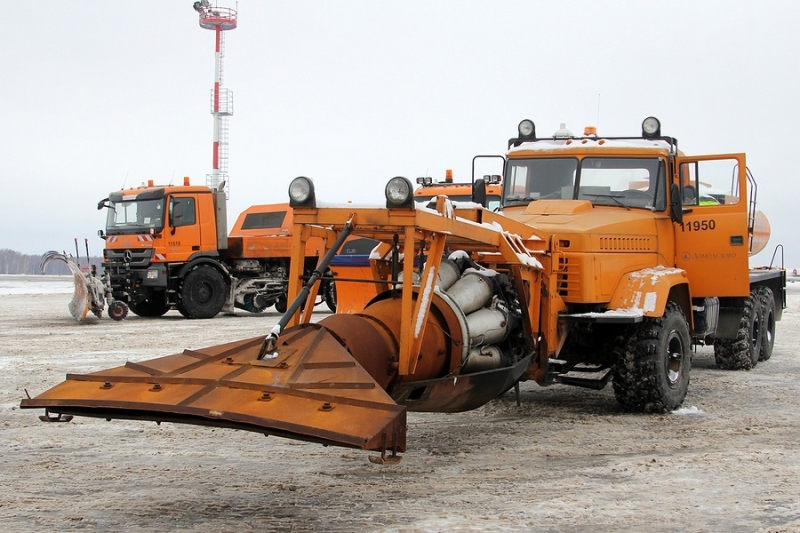 Yes, it really has a jet engine, the same one that MiG-15 and MiG-17 jets had. Those are pretty old jet engines, one of the first Soviet ones, and not used widely on the planes any more, but has got new life when mounted on the airport trucks. Alexander, Russian photographer and aviation enthusiast has taken an effort to visit an airport and make some nice photos. Thanks to him  we will learn why the trucks have jet engines installed: They put those jet engines on the trucks to.. melt the ice and snow and clean the runway. The stream of fiery gases on tremendous speeds discharge from the nozzle and melt ice and snow in any weather. If it stays bit longer on the same place it starts melting the concrete surface of the runway itself. On the back of the truck there is a huge tank to feed this beast. The airport workers say that those engines are very gas thirsty and can consume up to 1,700 kg of the fuel each hour. The price of the use is the reason they are not being used too often nowadays. In Soviet times they used them much more often and the worker of the airport who works there already for thirty years says that there used to be times when the convoy of such trucks were going from one airport to another via the public roads. Here you can see it up close. Inside of the truck there is a special dashboard to control the jet engine. Nowadays there are more “modern” ways of cleaning the runways but still they call these sort of trucks periodically when the fast reaction is needed – no other vehicle can clean the runway or part of it that fast. And this is another jet melting truck. This time the engine is mounted on the backwards. Do you know how people call it in the airport? They call it “Gorinich” which is a mythical Russian dragon which extorts fire from its mouth.

Thanks to Alexander for taking a trip to the airport and making the photos to happen!