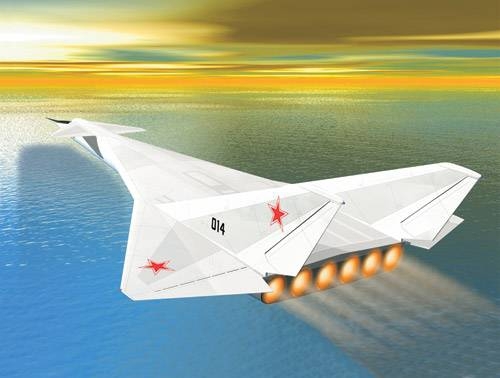 In 1950s the idea of creating the nuclear airplane, the long range strategic bomber powered on the power of atom was considered as a necessity by Soviet generals. At that time there was already built first Russian atomic ice breaker with its independent nuclear reactor on board. So the plane seemed to be pretty real. To give you a little spoiler on this post – yes, they finally was to able to build a working plane with a nuclear reactor on board which was powering it during the flight. Interested? Let’s see how it all looked like: There were almost 1,000 long range strategic bombers in the USA able to deliver nuclear bombs right into Russia at that time and Soviet army officials were afraid they had no such long range planes so they decided to get those, but not traditional propeller or jet powered ones but rather a nuclear one.

Why nuclear? Because according to their calculations the supersonic planes of big size needed for the transportation of lots of bombs would need over 10,000 tons of fuel just for one flight. Even storing such amounts of aircraft petrol in one place tend to be a problem. Here on the pictures you can see a proposed design for the first plane with atomic nuclear reactor on board.

In June 1952 the leading Soviet nuclear engineer Alexandrov was telling the “godfather” of Soviet atomic industry Kurchatov: “Our knowledge of atomic reactors allows us to raise a question of achieving the development of engines powered with atomic force in nearest years”.

However during these “few years” – three years to be exact, already the “conventional” heavy bombers appeared – for example the TU-95s “Bears” – which are still being used in Russian air force and are planned to be in service for as long as 2040 minimum.

Meanwhile, the planned nuclear plane has got its model name “M-50” and the nuclear engine initially was planned to be placed in the front part of the plane, but later as you can see on this picture was moved backwards. This was one of the final looks of M-50 – it was now called M-52, M-56K or even M-60 – depending on the specimen that was developed – in parallel there were a few of similar planes prepared by separate groups of engineers.

Most of such planes had the nuclear engines that used molten metals to transfer heat from the nuclear reactor to the engine itself. Those were molten lithium or sodium. The engines also had an option to work on regular aircraft fuel – just like your regular hybrid car can go on electricity and on gas.

Also those planes were hosting one small plane – drone as we call it now – inside of themselves. You can see it on the previous picture (one which is above this one). It is marked red there and is located in the mid part of the plane. The idea for this drone was to be able to shoot bombs in more precise manner without the main plane going too much down from the supersonic altitidues it was going to fly at. So it just dropped this little plane which did all the job closer to the ground. Sort of a nuclear Soviet sub-orbital mothership.

Sadly, this exact plane was not finished. The main engineer who supervised those groups was moved to more important task at time – building the ballistic missiles – the ones that can reach far far away countries for sure and without the tricks of dropping drones or using molten lithium. So the project was closed.

However, remember I told you the nuclear planes still were built? Yes, there was another group working on those, and here is their story: On this picture you can see the real and once being highly classified top secret Soviet nuclear plane. It was not a supersonic jet as the one before, was using the power of propellers to move, however it was still a nuclear powered strategic bomber!

It was developed in TU agency and their task was initially more simpler – to build a normal propellered but nuclearly powered plane.

At first in 1956 they built a “Flying Nuclear Lab” based on the normal TU-95 plane. Later the real nuclear TU went into process of building. This is a real scheme of the nuclear turbo engine of the TU lab. And this was another type of the engine they developed. The nuclear elements in this one was placed in round fashion around the engine. This was an unground testing site for those engines.

And this is how the reactor, the engine and the sensors were hosted inside of the plane’s body. The plane got its name TU-95LAL.
Behind the pilots cabin there was a very thick layer of radiation protection installed. However the outer walls were not that thick and radiation could go on the sides. Here is this plane photographed unclose. Once very top secret now possible to see and explore – this photo shows the walls around the nuclear reactor inside this plane. And this is how they were removing and installing the reactor from/into the plane.

Believe it or not but they were able to get this plane into the skies and just in one year – 1961 the year of the first Russian cosmonaut – this plane has took 34 flights alone.

The main danger they figured out was that such plane could contaminate huge areas of land with radioactive wastes. Remember that think side walls? So this project was dropped too!

The plane was left abandoned on the nuclear test site for over 15 years and then demolished by special order of top party officials.

However, this is still not the end of the nuclear planes history of Russia.

What if I tell you there was also a third plane?! After the first two projects were abandoned most of the knowledge and developed technologies were then used to build the nuclear submarines. They successfully have been proved a good working idea and tested the approaches to the compact reactors for years. So later 1970s they were able to build the most advanced Soviet nuclear plane to date. How about the poisonous wastes? Nothing like that. “The only waste it produced was the heated air stream”, remembers the engineer, “it was more ecologically sound than even the regular gas powered planes – no wastes at all”.

This was achieved because after 1950s-60s they dropped the idea of nuclear reactors with “open cycle” and developed the “closed cycle” ones.

This is a drawing of this engine. It was called “combined turbo jet nuclear engine.

The engineers were telling that everything was nice with this engine – no waste, almost unlimited flight range (sic!). Just imagine this plane could fly around without landing as long as it wanted or as long as it was technically sound. The only problem says the engineer was the damage of the reactor or engine – if someone shoots down the plane or it falls down due to some technical mischiefs. In this case the casing of the engine/reactor can be damaged and lots of nuclear toxic stuff can be leaked. So they moved on to protect the engines further but…

But then the cold war ended, the Soviet Union collapsed, and we still don’t see the ecological, cheap and unlimited air flights.