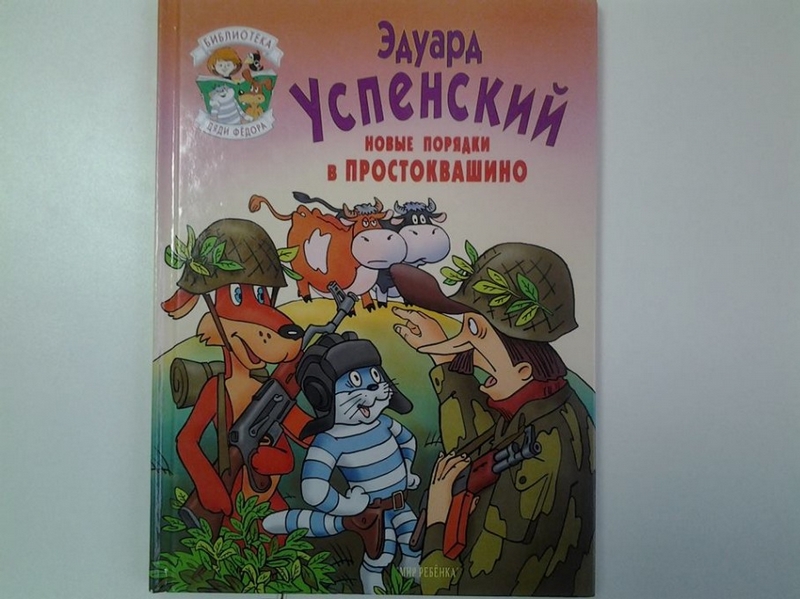 If you wonder what sort of books read kids in Russia, this is an example of the book. The story based on a popular in Soviet times theme of talking cat and dog living in the village that fled there from the big city with a boy. However this edition is now called “New Order in the village of Prostakvashino” and this is what it all about: If you want to read Russian text click for larger image. Or I’ll translate some of those.

The thing is that the animals have made their order in the village to which they previously arrived. And the old postman who tried to protect the village came to them for food and they say – you try to conquer us – why we should feed you? Now they are digging the trenches and talking: “Where would we get weapons?” “We will buy them from the airborne forces”. “Aunt Tamara has got a bazooka to not let them move”.

“Lets divide our spheres of influence in this village!”  said local gang.

“No, you take your share with the police”, said the talking cat, “we don’t want to share with you, get out of OUR village”. “Chapter Four – how the airborne forces were forced into captivity”. “Chapter Eight How we fought the mass media in Prostakvashino village”. “Forming a cossacks regiment in the village. Chapter Nine”. ..and making their own passports and coat of arms. 27 thoughts on “Not Your Regular Russian Kids Book”