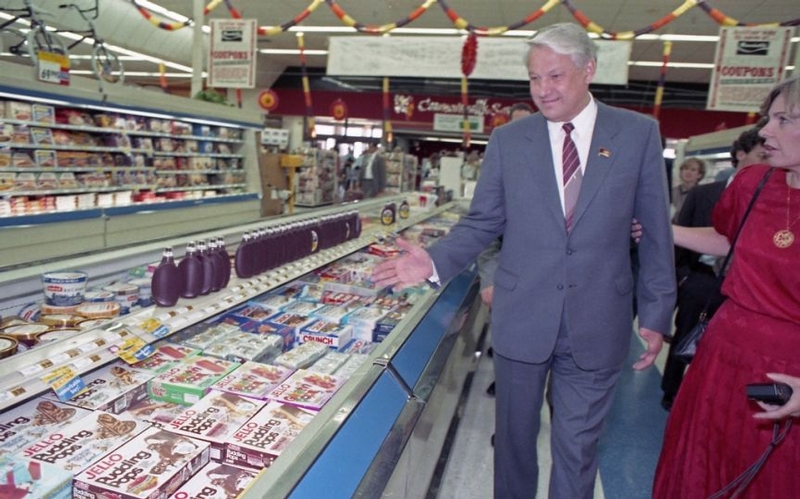 In 1989 Boris Yeltsin, at times just a Soviet parliament and High Council member, has visited United States of America with an unofficial visit. The program of the visit consisted of visiting different landmarks like a Lindon Johnes Space center in Texas etc, but Yeltsin also wanted to see how regular Americans live so he headed directly to the grocery storeÂ he saw on the street. Â The journalists that were with him on a trip were telling Yeltsin was pretty much shocked by the diversity in the store and was waving his hands all the time – like here on a photo. Inside you can see more photos of him in a store and also a short video which can help you understand why Yeltsin was surprised that much: The guy which followed him on a trip was telling later that this supermarket shocked first Russian president too much. “He was heading home on a jet and was sitting holding his head with two hands saying – They were lying to the people all the time, telling the fairy tales, inventing something – but everything is already invented!”, was mumbling Boris. When they got into the store, as one of the guys remember, the manager appeared and helped them to see the store in detail. “Yeltsin asked how many different goods are in store. TheÂ store staff answered that there is around 30,000 different things for sale now. Yeltsin then said – did I get the number correctly? Does my interpreter misheard the seller?”. So he was really in a shock look at his face and on a manager’s face. The Lev, guy who was with him, says that Yeltsin before never was in a Western store. “In the produce section we were shocked how good are the fruits and veggies!”, remembers Lev. And I promised to show you video to help easier understand why the future president was shocked, okay here is the video:

Here, a typical Soviet grocery store, no, not typical, this was a luxury grocery store with carts. Normal Soviet store had no carts and you had to ask a seller to hand you something each time you wanted to buy stuff. Take a look and hope you can understand why Yeltsin was shocked.