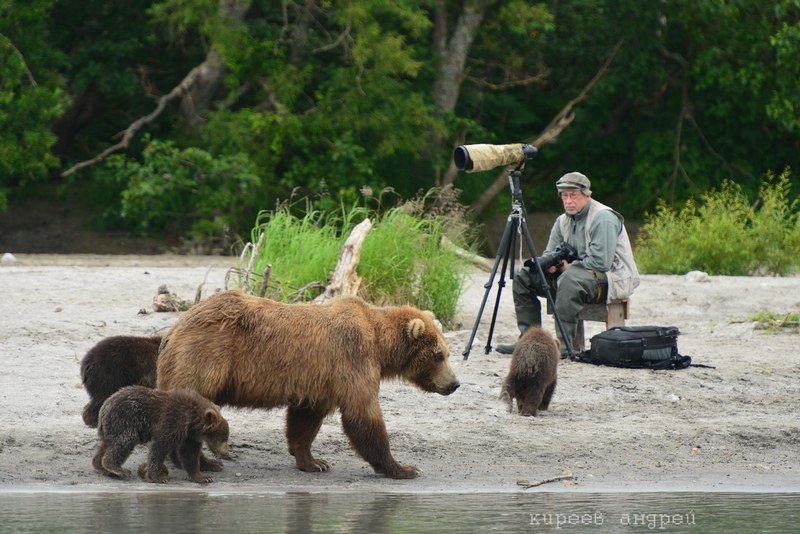 Russian wild life photographer Andrei has got used to making photos of the bears of Kamchatka however even he was amazed by this particular photo session when he got on his camera how the bear mom with a few little cubs got as close to the photographer as probably he could pet the cubs. See inside: “This was in August, there is plenty of salmon around so bears are very satisfied in terms of food”, says Andrei, “however later I asked my colleague, the one on the photos – how did you feel?” “He said – Andrei – I tell you frankly – I was very very scared!”. Just look at his face! At first the bears were pretty far away and he was just making his photos. Even not suspecting what would happen next. Until the cubs decided to see close what is this human around.

Andrei says: “I think that’s even the best photo is not worth of such a risk!”

“I was standing across the river on other shore with a group of tourists and an armed park ranger”. “The ranger told me that you should never trust a bear however happy and satisfied he might look, that’s deceiving!” The photographer guy was so shocked with this that he even didn’t move and didn’t look back to see what is behind. However behind him was another bear! And this was the riskiest moment when the cub went straight to him. You probably know how pre-cautious   bear moms towards their siblings. Here, look at his face again! Face of a doomed man. Probably that’s the face how people face their slayers in the wars. He even got courage for a shot! That was a lucky day for Andrei’s friend.

Big thanks to Andrei for the photos!

7 thoughts on “Close to the Bears”