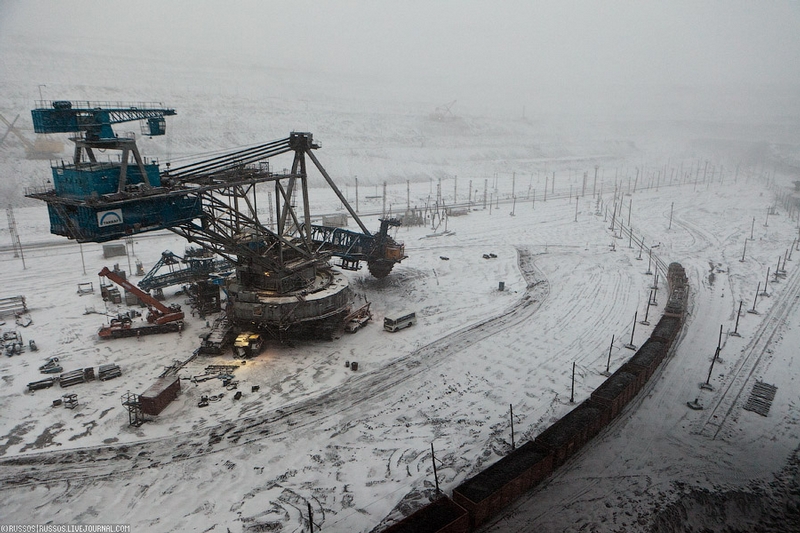 Do you see a bus on this picture? Look closer, it’s near that giant machine which they call “buck wheel excavator”. Wikipedia says its main purpose is: “to act as a continuous digging machine in large-scale open pit mining operations”. What can be more larger scale than the biggest world open pit coal mine in Kazakhstan built in Soviet times as the biggest Soviet open pit coal mine? Russian photographer Alexander Popov has traveled there and took this awesome pics and story so we now can take a look to! Â So let’sÂ see those in detail: This open-pit mine was built from 1965 to 1979. It had been planned to produce 50 million tons of coal per year (wow!) and in 1985 it has reached this number for the first time bringing 56.8 million tons of coal in twelve months! Because it’s so big and so productive they have even put it into the Guiness record book same year. Alexander says that their main purpose of the visit was not the mine itself but the giant bucket wheel excavating machines like the one on the pic above. He says that the German machine builders have made super giant excavators for this place on special order in 1972 and 1973. Alexander says that when he first saw this giant tracks he remembered a huge tracked machine from the Star Wars episode IV. And here is this giant in its “natural habitat” – inside of the coal pit mine. “This is a real self-moving ship!”, says Alexander, “It has got all sort of rooms: machine rooms, rest lounges and the myriad of different ladders and cables.” Some parts of this giant is radioactive and the sign is posted! “Nobody could explain me what exactly in these giants is radioactive!”, remembers the photographer. Two of the giants were modernized in 2009-2010 and you see they got computerized vision and control. This is how it rolls, or how it mines for actual coal. Here is also a short video Alexander has made:

It’s strucking silent inside of it while its mining! So Alexander went to the top most part of it. And this giant is being repaired now so you can compare it to a bus or a big crane standing nearby. It’s pretty high up there! The coal that is being mined here then later is being burned on Kazakhstan and Russia’s power plants. Also sold to people. Just one Northern part of this coal mine has proved reserves of coal exceeding 1,179 billion tons! JUST IMAGINE THIS AMOUNT OF COAL! When the giant is active and mines coal the main control “cabin” or deck-house goes way down to the rotating blades to be able to see the mining process better and to control it better! And this tractorÂ Â is used to feed the power cables, that’s what Alexander says about it.

Well, that’s it! Hope you liked it and was impressed by this giant scale mining operation!

Let’s say thanks to Alexander for the photos and the story!