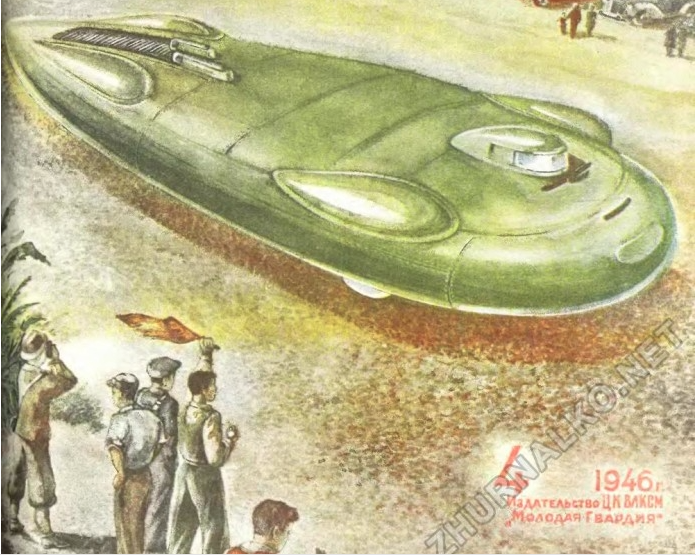 In Soviet Russia there was a magazine called “Technica Molodezh” which is translated as something like “Technology of the Youth”. And sometimes this magazine’s cover featured the vehicles that would possibly be roaming our Earth in the near future.

Some of them are pretty interesting, and basically all were wrong in predicting how the technology would look now, but still we can browse them here: The edition of December 1938 featured a multi propeller dirigible as a possible vehicle of the future. This magazine of January and February 1945 featured a picture of the “world after the war”. Later that year, World War 2 was over and editors were already dreaming of the brave new world. Most of the technology of course looks unreal – like this iron shaped double decker Soviet train-tram on the street or the spider looking red car, but the guy on what looks like electric roller skates seems pretty much correct for the year 2015 – I bet your city or town also has some new enthusiasts of electric means of transportation who own similar devices – either electric remotely controlled skateboard or scooter. It is still unclear why is he wearing something looking like a space suit, though. Then, in April 1946, they published a cover with the headline – “ultra fast car on the sea shore”.  Why it was on the beach with palms is still unclear but it looks pretty big! Later, in July 1948, they featured a “giant underwater tracked tank”.  To me it looks a lot like a modern Typhoon class Russian submarine… but on caterpillar tracks, for some reason! What was next was a giant seaplane that could transport cars and people all together, like the ferries do. This was published in June 1949. In 1952, five years before the first Sputnik – an artificial Soviet Earth satellite was launched, people already dreamed big about space journeys so they envisioned a giant “space port” inside a modern city, with red flags. You see it’s launching a dirigible shaped passenger rocket from the top of it. Ha, now something really cool. In February 1952, a magazine cover had an “advanced way to unload cargo ships”. If you look closer at this picture you can see something like a normal cargo ship that is turned upside down (its name is written upside down which indicates this) and then, through the openings in the side of the structure, all its goodies it was transporting are pouring into the trains passing by.  How possible is this? This thing from the year 1953 was called a “multi-functional underwater gadget”. Don’t know much about its purpose, but it looks pretty futuristic! And again, just like in 1945, ten years later they published their vision of the “future city”. Now there are no train like trams or spider cars, but a lot of things are made so people can see through glass like materials – pedestrian walkways, car roofs, etc. And you know what? Again, they were pretty much right with this one. Now in the 2000s in Moscow, they have built plenty of pedestrian crossings made of transparent materials – like on this one in Moscow: 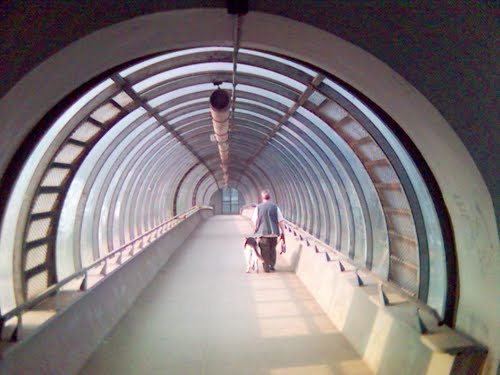 A superfast water vehicle from August 1956. A flying car. Well it’s sort of an obvious assumption that they might have came to much earlier, but still an early clue of such a one appeared on the covers in 1960. Looks like they tried to have all the future technologies by building on some already existing technology of their time. And now the cars on two wheels. What is the purpose of them? And this one is a trans Atlantic ocean cruising ship using “water wings” or water foils. Back then they already had successfully running hydrofoil passenger vehicles of a smaller size, so they dreamed this technology could soon transfer people across the oceans, quickly. Well, not sure what this is. The text on the cover says: “A flying saucer? Yes…”. So some sort of a flying saucer inbred with jet planes.. In 1969, space exploration was already unfolding and they came out with a cover featuring a “space regatta” or space ship race using something looking like solar wind powered sails. In 1972, a sort of a hybrid between a helicopter, plane and a hovercraft. Now the private ekranoplan that could seat two in 1974. And this “Ferrari” was a “sport car shaped as a wing”. Looks like it was three wheeled, as well. As we are getting closer and closer to the modern age, things become more “normal”. This is a maglev train. They already have built some in Japan and Europe, so maybe its pretty close as well. However, even in 1983 they could dream of something not very real, like this stepping machine that could, quote,  “pass where the regular wheels or even caterpillars can’t go through”.