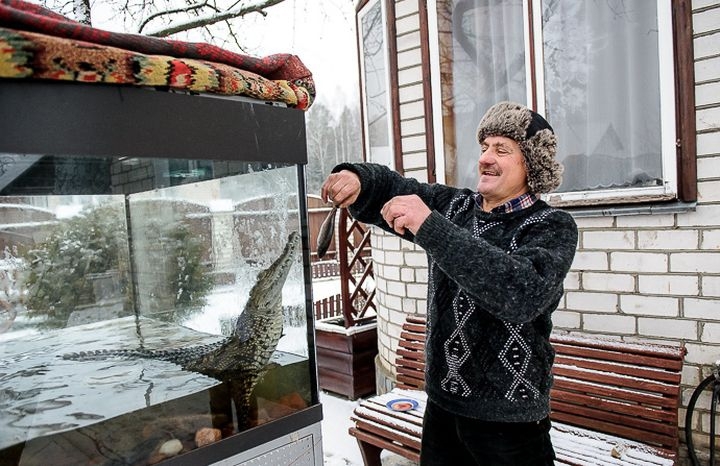 Bezodnitsa village near Minsk, Belarus is getting ready for the New Year holidays. People heat their bath houses, decorate trees, and remove snow from their yards… And just like other busy locals a Nile crocodile, Gena, looks forward to celebrate the upcoming holidays too. He observes the world from the 2 x 0,5m terrarium and looks rather happy. Gena is still rather young – 7 years old, his length is 1,30 m. According to the statistics, Nile crocodiles live up to 80 years old, it probably means that Gena has 73 years of village life ahead.
His owner, businessman Denis Pleshak, told where he got the exotic pet and how he keeps him to Onliner.by. The Nile crocodile for Denis is not a tribute to fashion or a fad of a wealthy man, Gena appeared in his life by chance. Seven years ago, an employee of his computer equipment store stumbled upon “a crocodile – laptop exchange” advertisment. They had plenty of laptops then, so they thought why not? An “Asus” priced at $600 was successfully exchanged for a Nile crocodile. His previous owner kept him in a flat but became a father so his wife made him get rid of the animal.

The terrarium was placed at an office, visitors initially thought that Gena was not real. Denis had to learn many things about keeping a crocodile. He didn’t eat big pieces of fish and tried to escape. But everybody loved him so that was the reason they brought many useful books. Denis learnt to feed the animal, to clean the terrarium, to provide him with proper light, to change pumps and much more…

By the way, Gena has never bitten anyone. Everything is okey when the crocodile is treated right.

Denis tried to create a crocodile logo for his business but it didn’t work – there was too much similarity with Lacoste. Some half a year ago, Denis had to close his store and start his business over on the Internet. What could he do with the terrarium that was too big for any standard apartment? The decision came from his parents – Gena was taken to their countryside house in Besodnitsa village. Denis’ father has much affection towards Gena, too. He feeds him with river fish twice a week, proudly shows him to local children, entertains him with illumination. He refused to give it to a Zoo or sell it. Gena recognizes all family members who come to feed him with fish, chicken or beef.

Do not worry, he’s not cold, the temperature of the water in the terrarium is always +27C. Gena is also entertained by toys and live fish so he may also display his natural hunting instincts. 2 thoughts on “Man From Belarus Keeps Crocodile As Pet”