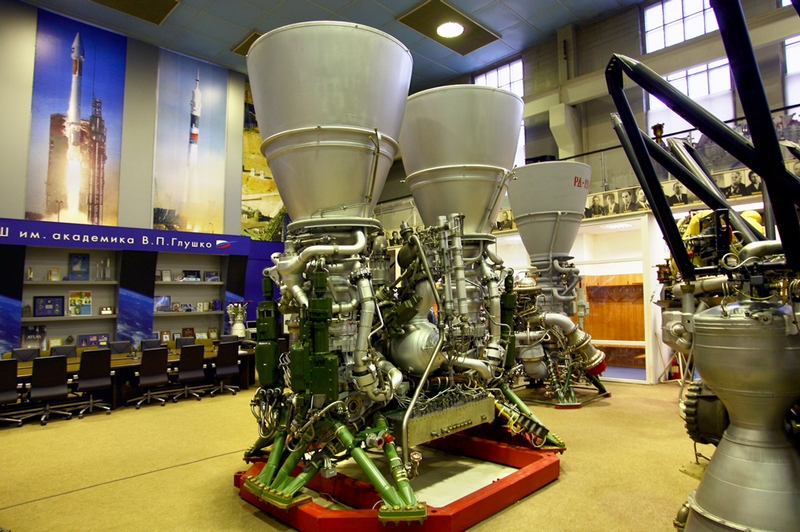 Blogger zelenyikot visited the scientific-production association “Energomash” to see the process of creation the most demanded and most powerful liquid rocket engines. It’s exactly where the engines for Soviet-Russian rockets “Soyuz” and “Proton” were made, for Soviet-Ukrainian “Zenit” and “Dnieper”, for South Korean KSLV-1 and for American Atlas-5… The demonstration hall or a little museum of the association. Do you see a 7 cm spray on the table? That’s the thing that gave birth to all Soviet and Russian cosmos. From the very beginning there was a small group of enthusiasts of rocket production formed in 1921 and later, in 1929 turned into a gas-dynamic laboratory and finally into the scientific-production association “Energomash”.

The disk with a sphere in its center is not a model of the solar system but a model of a electrorocket spacecraft. Solar bateries were supposed to be placed on the disk. In the background are the first models of liquid rocket engines. 100% replica of a German A4 called R-1, it’s fully made from Soviet materials. At that time German was the main competitor of the USSR in the sphere of such innovations. Soviet engineers did much to make the German construction lighter and the thrust rose to 51 tf. Then they came across the problem of non-stable fuel burning in a big spherical combustion chamber. So they started to develop engines with cylindric chambers. It was a right and successful decision, the museum still has the first working prototype. Quite surprisingly the inside of the combustion chamber is made from copper alloy. It seems that the element, used where pressure rises above hundreds of atmospheres and temperature – thousand degrees Celsium, has to be made from some refrectory titanium or tungsten. But it turned out that it’s easier to cool down the chamber than to reach the unlimited heat resistance. The chamber was cooled by liquid fuel components, copper was used because of its high thermal conductivity.

The new type of chamber was initially tested for military projects. The chambers are hidden in the far corner of the demostration hall. In the foregorund are the pride of the USSR, engines RD-107, RD-108 that provided the country with the superiority and let Russia remain the leader in the manned cosmonautics till the present days. Later it was decided to refuse such constructions, instead they began to fully deflect a cruising chamber.

The problem of non-stable burning was not completely solved, that is why majority of engines of the design bureau named after Glushko are multichamber ones. There is only one single-chamber giant here, it was developed for a lunar program but never was serially produced being replaced by its competitor NK-33 for N1 rocket. Engine for a ballistic missile R-36M aka “Satan”.

Today they are called “Dnieper” and used for peaceful purposes. And this is finally the pearl of the design bureau and pride of “Energomash” – engine RD-170/171.

Currently it’s the most powerful oxygen-kerosene engine in the world – 800 tf which is 100 tf more than American F-1 has. However RD has four combustion chambers, F-1 has only one.

RD -170/171 was designed for the project “Energia-Buran” as an engine for strap-on boosters. Such construction enables to secure the engine reliably but to control the flight by means of a cardanic suspension. Finally the hope of the enterprise – engine RD-191, the low-end model of all the family. It was created for “Angara” rocket and was already used for Korean KSLV-1. Many thanks to zelenyikot for the cool excursion!