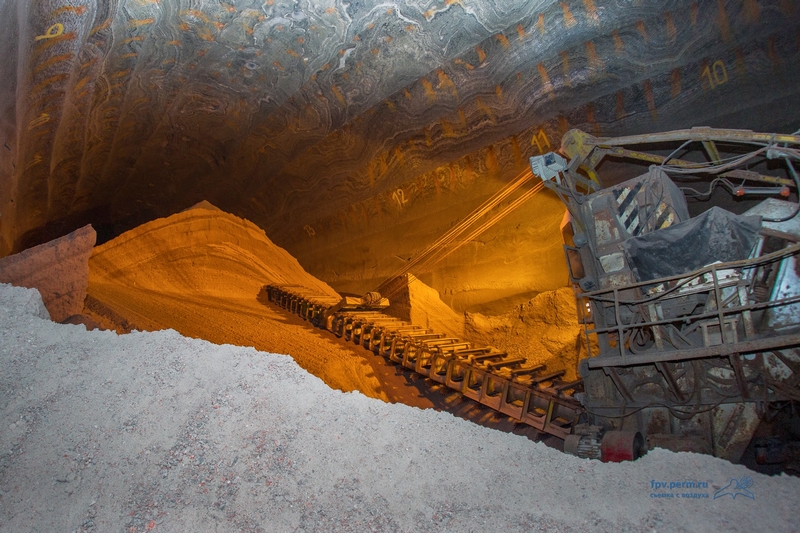 Have you ever been 400 meters underground? It’s like the Empire State Building was flipped top side down and hammered into the ground as if it was a giant nail. Then, where its tip arrives is around 420 meters, so exactly there these miners work and exactly there the guy Ilya went down to take some photos. The mine is not a coal mine – it’s a potassium mine – they get this mineral which is used as fertilizer, and the company, Uralkalij – is the world’s largest producer of potassium. Thanks to Ilya we can see where most of the world’s potassium fertilizer is coming from. Before going inside the mine the visitor has to get dressed in all white underwear provided  by the company. On top of it goes a vest, a helmet and rubber boots. Also, everyone must be equipped with a light and a “self saver system” – he says it allows you to breath for up to 5-6 hours if an emergency happens. Then they get into this elevator cage to begin their dip into the 400 meter pit. “It’s like you are in the Half Life game – you are going, going and going down into a giant abyss. Photos can’t express this!”, remembers Ilya. When they got down to the bottom, a car arrived. This is not a regular UAZ car like they have on the surface, but one that has a water shield to shield any sparks. They had to make a seven kilometer trip in the car. “I don’t even know how long all those underground roads are, there are numerous tunnels and galleries around. The one we went through took us seven kilometers to arrive!”, remembers the guy. Those are the mining machines. “When they are on, the air is filled with white dust. However, they say it’s a healthy one and that it is even good to breath it”. Those are the tracks the machine leaves on the stone walls. And this is a self propelled car to transport the dust from the place where it is mined to the elevator. Well it doesn’t exactly go to the elevator first. First it dumps the minerals into those holes in the floor. Below, there is one more level where a self moving transporting conveyor belt is located. The conveyor belt is also almost seven kilometers long! And this is what the miners workplace looks like. And he is a miner, the operator of the machine. And this is a warehouse, close to the elevator, where the ore and minerals are transported by conveyor belts. From here it goes further up. There are some people in this photo for scale. This machine in the storage area mills the ore and minerals to a finer grain before it is raised up. So now the guys and the ore are coming up in the same lift. Back into the sun light! And this is what is on the surface. Not just a mine but a factory where the potassium fertilizers are being made. They have some long conveyor belts on the surface, too. Big thanks to Yuri for his effort going that deep! And for the photos!

1 thought on “400 Meter Down Underground: A Potassium Mine”