Today you are going to see photos from a mysterious phenomena that happened deep in the Northern Russia. A giant hole in the Earth appeared in the Yamal peninsula some time ago there. Sometime ago  helicopter flyby was made to take the photos and confirm that the thing exists and it is not the result of some weapon being used or natural causes? Then they sent a second group of scientists to explore the place. The scientists went there and weren’t able to go too close as the land was collapsing all the time and there were strong winds on the surface and it was considered dangerous conditions to carry on. So they returned again in the winter, for the third time. And we have those exclusive photos! Let’s see how it was. 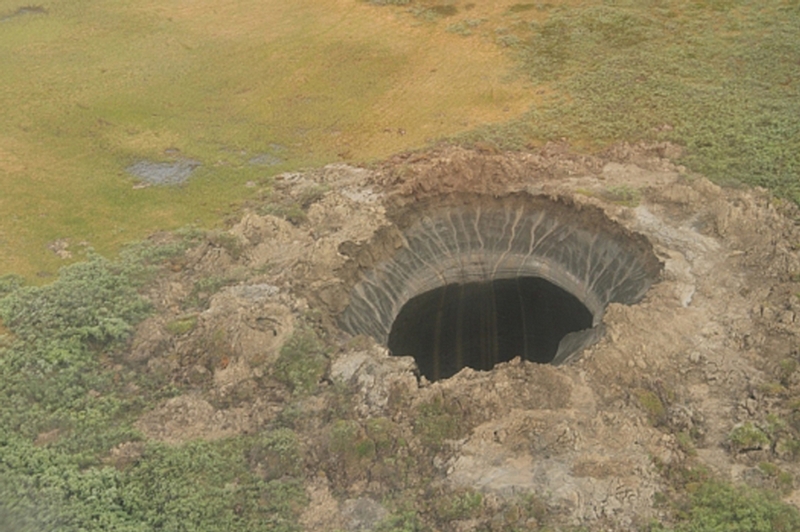 So this was a hole that was discovered a few months ago. It was big and dark and they couldn’t get any deeper than they did initially.  So they waited for the snow to come. So in winter, with a plenty of snow  they arrived again. It was not an easy task to make exploration there both physically and mentally. The landslides were often and the black hole was not welcoming at all. Many were experiencing weird panic attacks.

They went inside again and carried a geo radar with which they penetrated through the bottom of the hole.  They figured out that the place has the shape of a giant mushroom, with a narrower channel going down and becoming wider as it gets closer to the surface. “This time we were able to reach the bottom”, says Vladimir, the explorer, and I was shocked with its size and form. Again. Now the bottom has already turned into some sort of frozen lake of unknown nature. They got the samples of ice and ground. Meanwhile, on another part of this peninsula they have found another hole, similar to the first one, let see its photo on the next page: This is an aerial view – the bushes you can see are actually small Northern trees. The reindeer herders who travel with their animals across the place said that they were witnessing how this one appeared:

“At first there was a fog. Very dense fog.”, says the reindeer herder, “then instant flash of light appeared and the Earth rattled. Then this hole was there”. It’s interesting that both of the holes are in different places but both of them are at practically equal distances from the Polar circle. What are they and why they appeared are still not clear.

Hope you liked this story! We have a lot more like this on our main page! Just click here to see more.

22 thoughts on “Exploring the Giant Sinkhole of Yamal Peninsula”