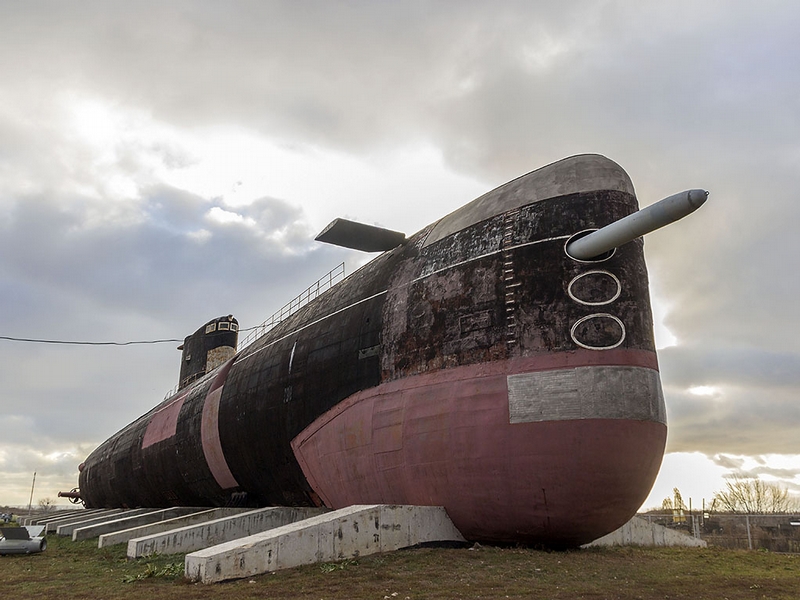 Ok ladies and gentlemen, it’s story time. Did you already know that in Russia there is a museum where a full size submarine is standing on concrete slabs? And it’s not some coastal museum where it stands close to water but it is a long way from the shore and this huge giant was shipped there somehow. Want to know details and how it was actually delivered there? Let’s see… Thanks to Megard, the photographer, we have photos of this thing. He says it weighs over 4,000 tons and its length is over 300 feet (100 meter). This thing is huge and it’s far from any water. So how did they get it here? Well there is a story about that with photos too!

So it all started with.. LADA. Lada is the biggest car manufacturer in Russia and was one of the two or three of its kind (and the biggest one) in the USSR. So LADA is a huge corporation, even now. So once upon a time back in 2001 some manager dudes at LADA decided that they want a real world huge submarine parked under their windows just to improve the view. When someone like this wants something, he usually gets it. So they did.

They went to the army (or NAVY) and told them we will give you some LADAs but you give us a submarine and deliver it. No, of course they didn’t do it like that, but they really did contact the NAVY to inquire if they have a spare nuclear U-Boat. There in the Navy they had some boats, but they didn’t want to give the guys from LADA a whole nuclear boat so they picked some of the biggest diesel submarines, and this particular pretty boat that was built in 1979 and.. sold it to LADA. Actually, this model is the biggest non-nuclear soviet and Russian submarine, so the Lada guys still got a pretty huge thing to play with.

But in order to make it look good for officials and normal people, the Lada guys said – “We will make a museum and this boat will be a centerpiece of the museum – this way we would sort of make it all legit and would be able to have a U-boat and not attract too much attention”. So the day came and they needed to ship it. There was a little problem – the LADA factory was not in a coastal town. Actually, it is the very continental town of Samara, which is about 1,000 kilometers from the closest big water like the Black Sea. And more than that, the boat was even not in the Black Sea but in the Baltic Sea, and it could take it a year to get to the Black Sea – the nearest one to LADAs hometown.

However, Samara city where Lada is, is close to the Volga river. The bad thing is that the river is pretty far from the factory. But Lada managers thought: if they ship it by river to Samara then we will find a way to pull it from water and deliver it right to our office – just some few kilometers, not a problem! 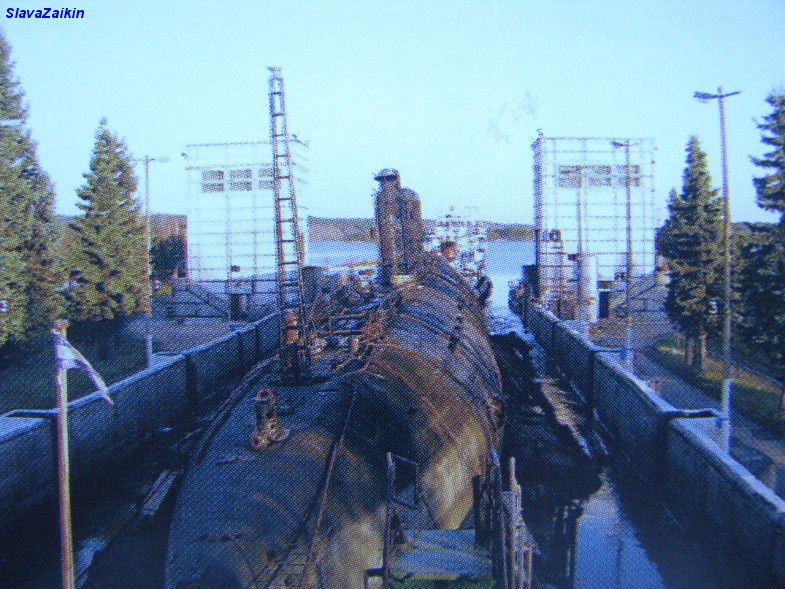 In order for the boat to travel along rivers (instead of the oceans) it was pumped with special stuff like foam so that it could float like a ball. Over 400 tons of hard and liquid elements were pumped in to it to make it float. Then it had to cross 2,245 kilometers to reach the Lada office from a NAVY base near Finland.

So the journey has began. At first the boat had to cross St. Petersburg – at night – where all the bridges are lifted so that ships can pass under them. To travel the Russian rivers, ships had to cross the gateways where the water level is adjusted – so they crossed a lot of gateways or locks.
The funny thing is that the LADA city is in the South from St. Petersburg, but there is no straight line to go from St. Petersburg to the big Russian rivers like the Volga so first they had to go almost 400 kilometers North, a totally different way than they needed, to be able to reach Onega lake – the one from which you can start getting into Russian rivers. Look at it on map – its pretty far North. 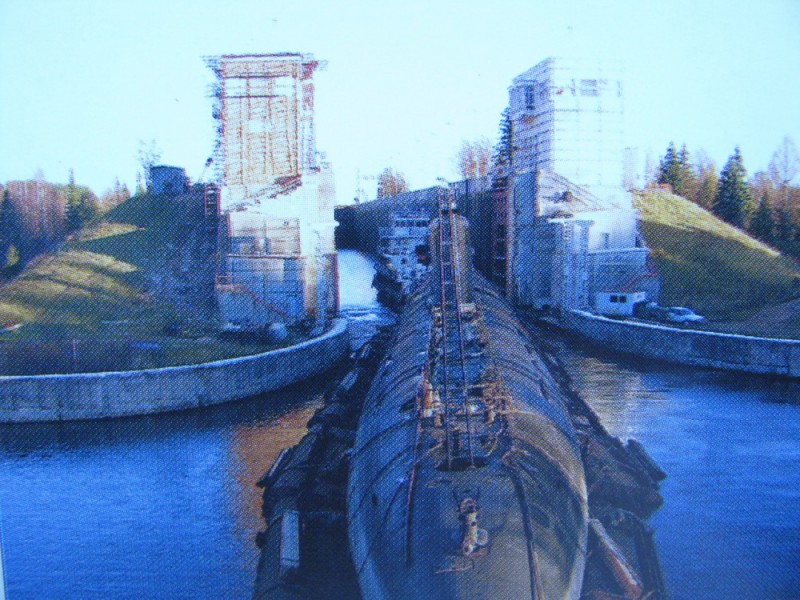 Then finally at the beginning of the winter the boat reached Samara. However it was already all snow and icy everywhere, so they had to leave it in the ice covered river until spring. The LADA managers were eagerly awaiting its arrival. Thus you can see a u-boat in winter near Lada city. However the patience of the managers disappeared as soon as the first spring sun appeared. They demanded to get the boat out of water and start moving it NOW. Moving where? Moving to our LADA factory! But, sirs, how? There is no water near your office? By ground! Ship it by ground. Like with FedEx ground or something!

So the puzzled workers started pulling the boat ashore. 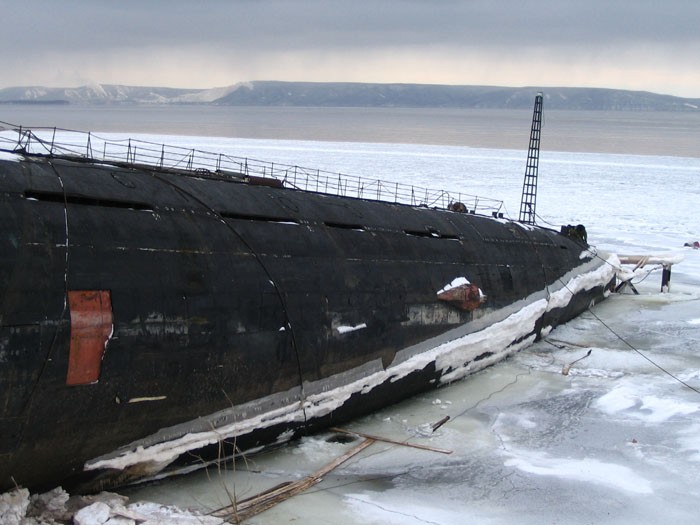 It took a lot of effort. And there was still ice and snow. But managers couldn’t wait any longer! 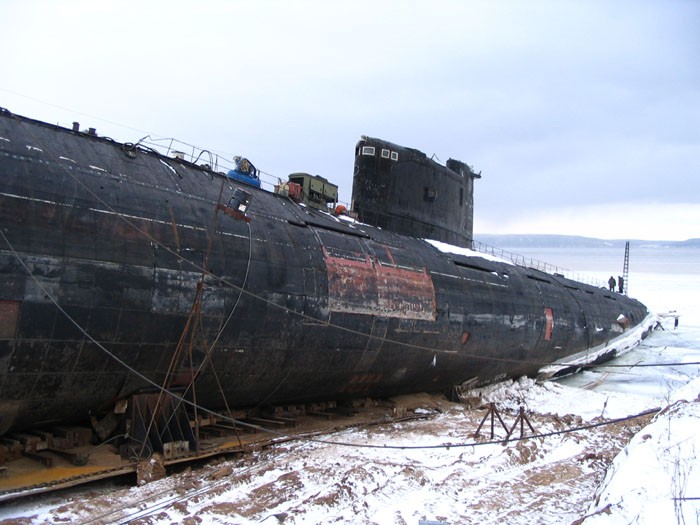 Managers were coming to the site and preaching to the people working – “Look at Egypt they built those crazy pyramids and you can’t pull just a little submarine ashore!” 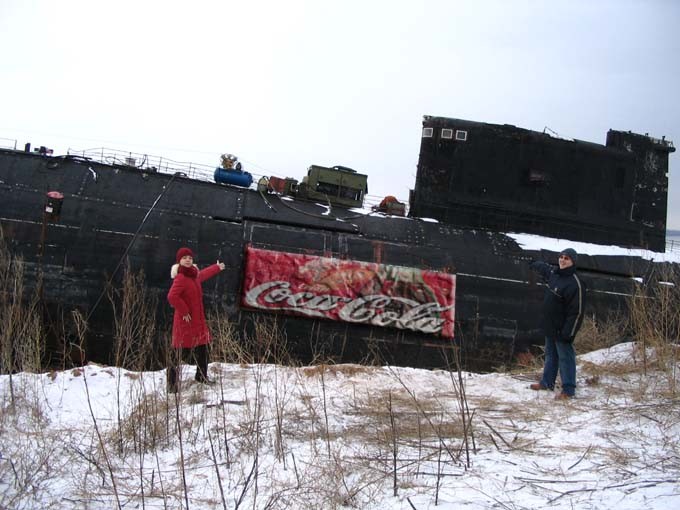 But they managed to do this. With the help of ropes, trucks and coca cola. 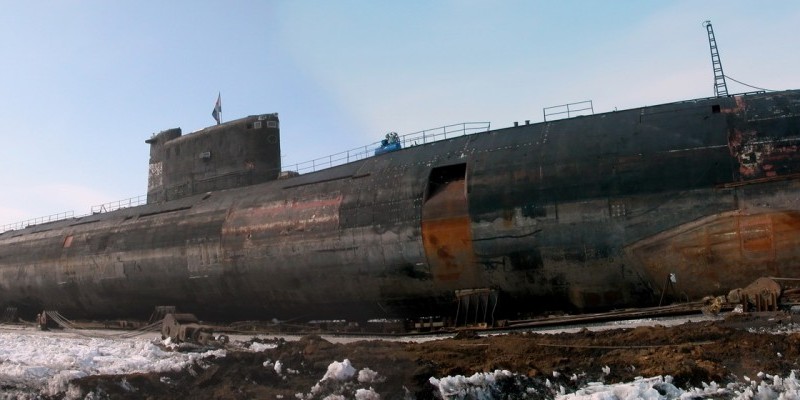 And left it there. Until the snow melted. And then like those Egyptians they had to pull it a few kilometers over the fields and steppes to the office. 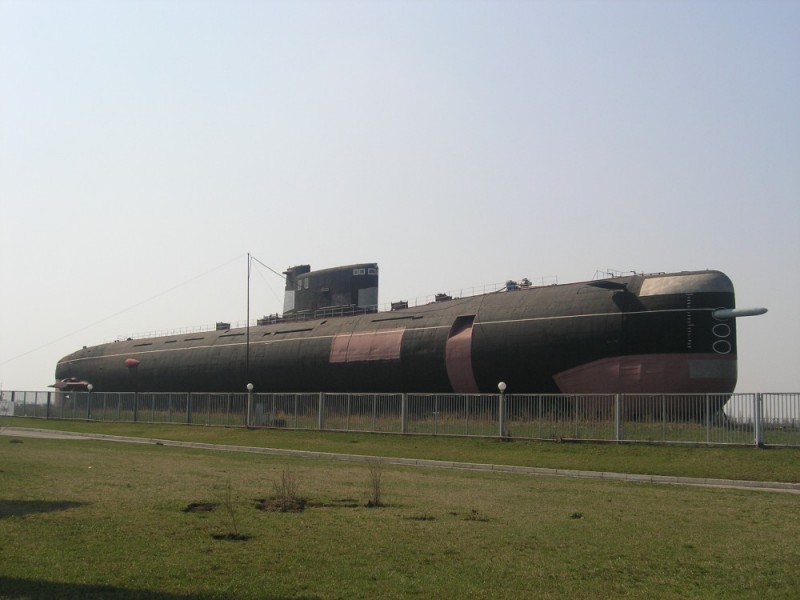 So here is the Lada factory and the boat. Nice view from the window!

Thanks to the guys for the photos and if you like it – share it. More people should know how the U-boats travel by shore in Russia thanks to Lada and stuff!

15 thoughts on “Russian Submarine Standing Ashore Away from Coast How Did they Get It There?”