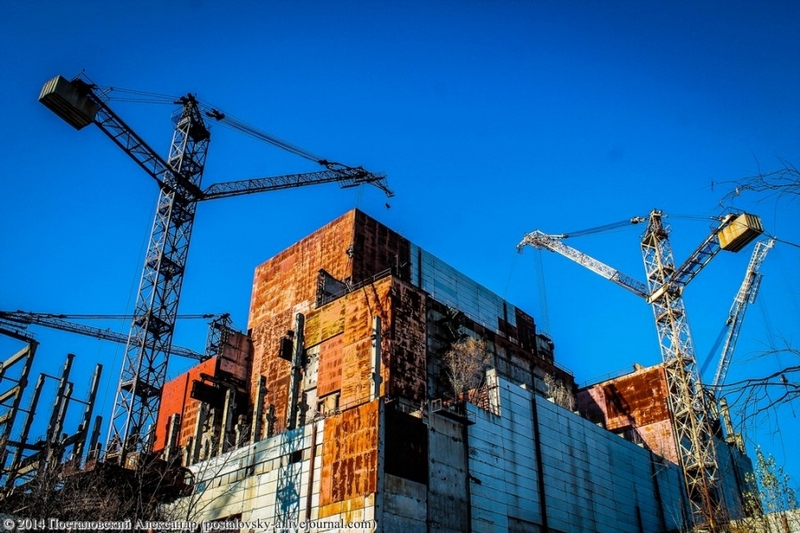 This must be the most ambiguous place in the Chernobyl Exclusion Zone. On the one hand it’s a breathtaking industrial beauty, on the other hand it’s a symbol of the time that stopped forever. Finally, it’s more evidence of the biggest industrial disaster, portrayal of disappointed hopes and wreckage of brilliant ideas. All these aspects are reflected by this unfinished fifth power unit of the Chernobyl power plant. This power unit had been planned to be put into service in November 1986. However due to the accident of April 26, 1986 it was not able to happen… The fifth power unit remained unfinished, to stand forever surrounded by construction cranes…

They also planned to build a sixth power unit but only had time to break the new ground for it. View of a construction crane from one of the roofs of the 5th power unit. Famous dark red panels of the building make the 5th power unit the most recognizable object in the exclusion zone. One needs to be careful while moving on the roof here. Cabin of a construction crane. One of the buildings in the precinct. These are some images taken inside the building… One may get lost here for hours… The 5th electric power unit is certainly a must-see place in Chernobyl – it is a vivid incarnation of the tragedy of 1986, the phenomenon of frozen time, aesthetics of abandoned industrial beauty. The power unit itself and the surrounding territory are subject to periodic cutting but the place remains to be rather interesting not least because it brings quite unusual views of the zone.