The AN-12 Russian Soviet plane was one of the most widely used planes around the world, together with the American C-130. European socialist countries, countries of Africa and Latin America and of course the Soviet Union have been using it on a large scale all over the world since it began being manufactured in the 1960s. Let’s see what this plane is all about. This particular plane is from 1968 and in still being used. Those planes come in army and civilian versions. This particular plane was an army version, as it has gun turrets on the plane. That strange bulge on the front part of the plane was a gun turret – it was transparent bulletproof glass but now it is covered with steel and painted. And here is one more turret! Looks like even the guns are intact. Just in case? Now lets see what’s inside. Trucks can enter the plane by themselves. This place is not hermetically sealed during the flight so it is not recommended to stay here for a long. There are three doors in this section. This crane on top can be used to pull in loads of up to 2.8 tons in weight. 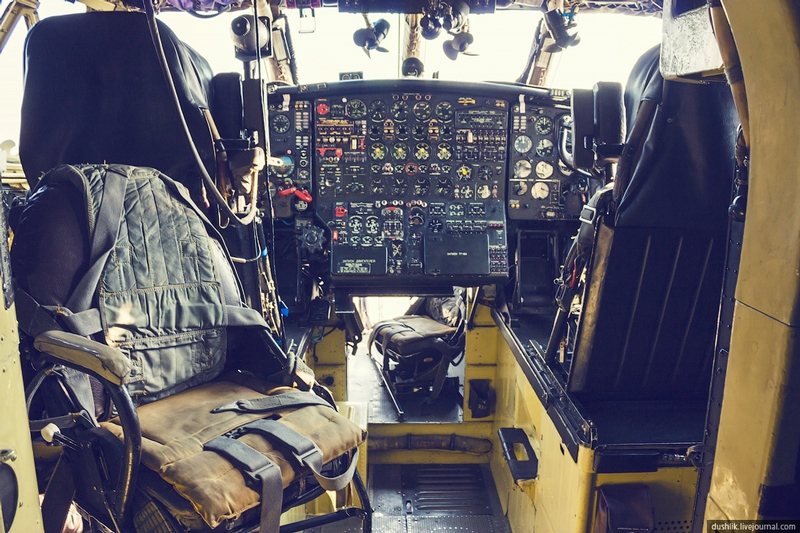 And here is the cockpit that can seat five crew members. It has two emergency doors to leave the plane quickly when needed. This place is for the navigator. And this is his old school work panel. This is his view if he looks back. He can see the chief-pilot from down there. Now you are familiar with the AN-12 plane! 🙂

5 thoughts on “AN-12 Soviet Airplane”