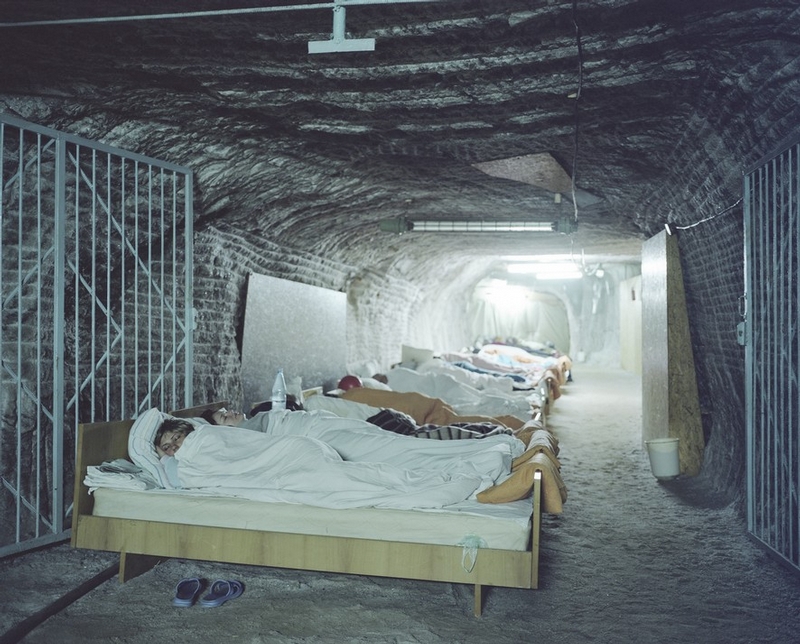 Kiril Kuletski, a photographer, has visited a unique treatment facility in Ukraine. This is an underground salt mine which has been used for more than forty years to treat respiratory difficulties and it has been proved to be doing this well. No walls, nothing but pure salt caves. So people come deep inside the mine to spend a night, or a few nights. How deep is this? Over 300 meters (1,000 feet) deep! Let’s see more: These salt mines have been known since the eighteenth century, however they decided to use them as a treatment facility only as recently as in the 1970s. Above those caves, on the ground, there are salt lakes that are said to be saltier than the Dead Sea. They call this “speleotherapy” as they call a science studying caves, speleology. They say that in the 1950s in Poland they discovered that the miners were less prone to respiratory diseases, so they started investigating the effects of the caves. Especially salt caves.

In the cave mines there are tenfold less bacteria in the air than in the most sterile room in a hospital, so it also helps people with skin problems. Again, 300 meter deep, but the temperature here stays pretty much the same the whole year round – around 22 celsius. On the ground, there is the hospital part of the facility. Each year they treated 300-500 people, to get into the caves some people had to stay on the waiting list for months. However in 2008 they had to stop the service: one day underground waters broke the walls in one part of the cave facilities and flooded one branch of caves completely. Still some lucky people can get there even now.

Big thanks to Kirill for such an interesting discovery and photos!