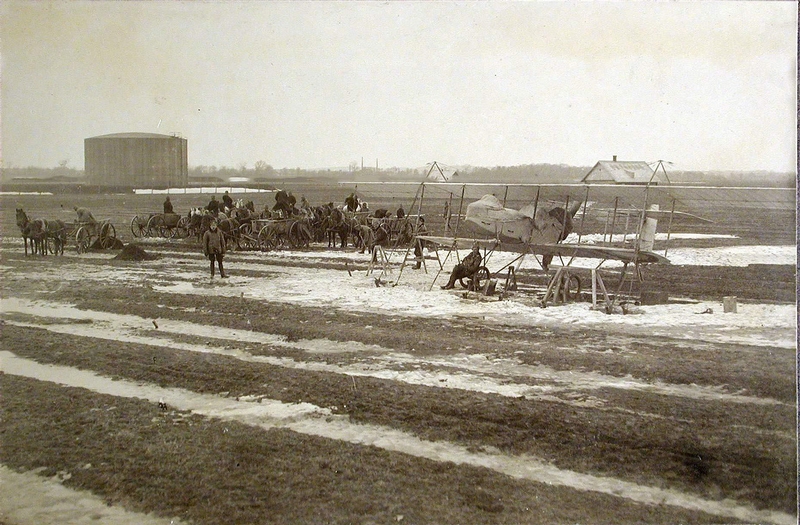 We’ve seen here a lot of the contemporary Russian air force, but what about 90 years ago, what did it look like? This is how. Horses, horses, some planes, horses again, no pavement on the runways, wooden sleds and more. Let’s see it in some more detail inside. At that time, Poland was a part of the Russian empire and the Russian air force had a base there. Here people are cleaning the air field and… tramp down the ground with their legs in order to get more hard surface for the planes. They say these photos were taken on January 1st, 1915. 99 years ago, on the first day after the new year party. Probably not the funniest day to go and work on an airfield. And here soldiers unload the parts of the airplanes that have arrived.. by train! Now its 2nd February of the same year. And here is a crashed plane. Two days after the planes were unloaded from the train. And here soldiers are employed for some destruction – they are removing the phone poles of the future airfield, the one where they were tramping the ground. No more phone lines here. It’s a serious air base now. Also some marching to keep soldiers in form. ..and building new phone lines! Now across the roads. And assembling some more planes. This one is for the leader of the flight squadron. And here is the leader, ready to fly for some scouting. Filling a hydrogen balloon with hydrogen. What are those were used for? Here, already fixing the engines. I remind you that these were the times of the First World War so this plane looks like it has already been shot. Do you know what this guy is doing here? He is warming up an oil drum over a fire pit he has dug in the ground. That was the way to warm it up. Ok and finally some shots from the air plane. This is a railway station on the day of the imperator Nickolas I’s arrival. Pretty crowded. And now some pilots and their planes. And a crashed plane again.

Those were interesting times indeed – already had the planes and could climb into the air but had to warm the oil in the ground firepits and use horses and stamp their legs to prepare airfields..