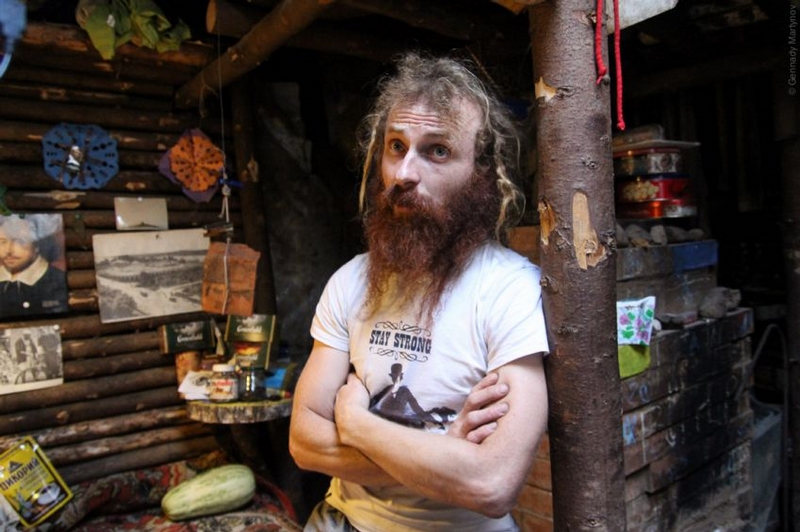 Hey, this is Yuri. He lives in a tipi in the woods near Moscow. He also has a dugout where he probably spends his time in winter. He has lived there for a few years already. He was a lawyer before living here. His tipi is easily seen from the Yaroslavl highway, so he is not deep in the woods. You can learn how he lives here by reading on further: This sign reads “An Intercom. Please let me know you are approaching so as to avoid misconceptions”. “Do not walk on grass” reads the sign. This tipi is his third dwelling here. The first two from when he first moved here haven’t survived. This dugout is his main place of habitation. You can see a loudspeaker on the roof of the hobbit-style dwelling – this is motion activated and the audiobook starts playing when a visitor approaches. Yuri is hospitable, and offers coffee and green tea to his guests. He has  a computer in the dugout. Yuri’s philosophy in a nutshell is – let me travel through not leaving my Tipi, so he hopes the world moves around him and visits him without him visiting anyone. This is Petr, a friend of Yuri who posts some photos of Yuri on Facebook from time to time. Besides Yuri, the dugout is also occupied by the white rabbit. And this is the other end of the intercom outside. Tipi is now used as a library. People can bring books and take books. One for one. A modern midi keyboard and ceilings made of roughly cut trees. And a pink lantern. This is the highway – right behind a piece of fencing. Yuri is not your regular hermit.

It’s a pity that we don’t know much about the reasons why Yuri moved there – the author didn’t mention this in his original posting. There are some words “art” being spotted here and there around Yuri so this might be some art project which has lasted a few years already.

3 thoughts on “Hermit Yuri that Lives in a Tipi”