Meet Stepan. He calls himself Stepan Dallas Walker. Here on the photo he is posing with an American flag near the Hermitage of St. Peterburg. People on background probably don’t understand what’s going on. But we do – he claims he is an American patriot (though he is not even a citizen) and especially likes the Marines Corps. So he owns full Marine camp, an American flag, rifle replicas and a lot of other things that you can see inside. Also he has a friend who seems to be sharing his passion. More inside: 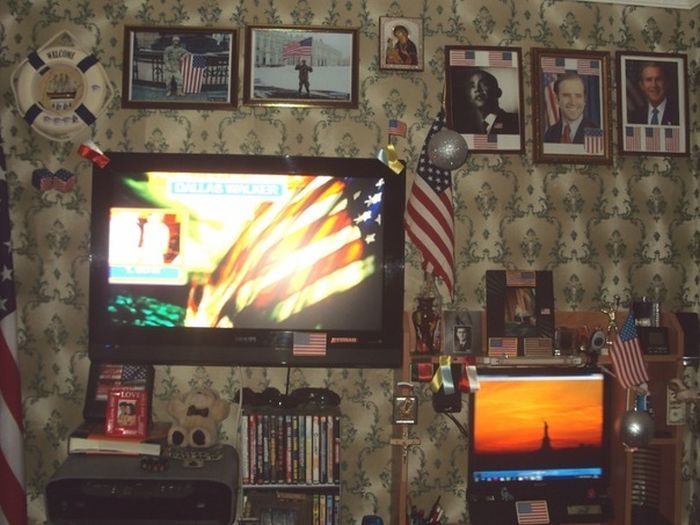 I am not sure if he can even speak English but here is his room. His TV shows the flags and displays his “name” – Dallas Walker. His computer display is a Liberty statue. Here is a nice one, Stepan walking the street and some guys filming him:

Guys on the car were pretty amused. Here is his friend Here they celebrate 4th of July. You see he got pepsi and burgers as he thinks this is what American Marines should it. He wears underwear with green currency on it. And he has a parade uniform too. Here is him in Peterhof, Russia kissing the flag. And that’s a screenshot of his profile page in Russian social network. Do you have he got any chance?

32 thoughts on “Russian Guy Thinks He is an American Marine”