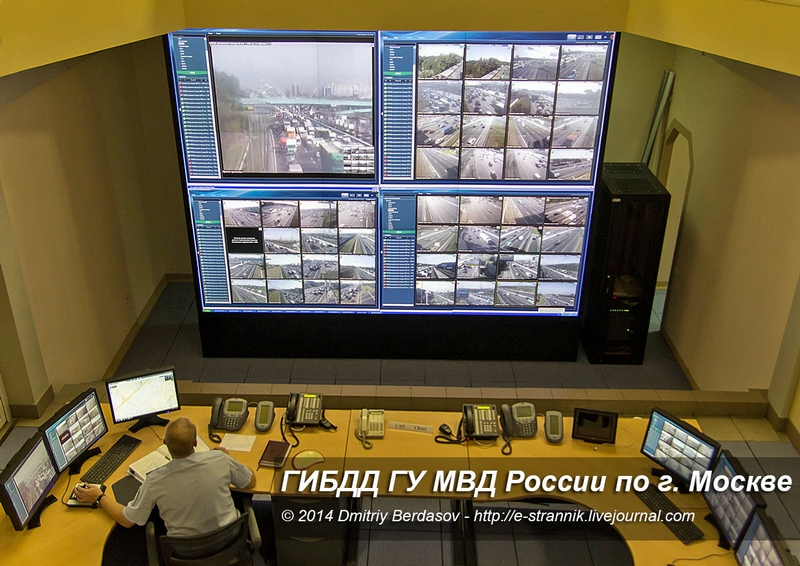 Big brother is watching you and for sure he does it in Moscow. Hundreds of people sitting in a large white building in the centre of Moscow gather information from over 130,000 (!) cameras installed in the city and are constantly tracking people and situations around. Wanna see a bit more? We have a bit more thanks to Dmitriy who visited their lair and took some photos with his tablet pc: So that is the building in question. Not every Muscovite knows what goes on here. However, since 1970 – yes that long ago, when the first ten analogue cameras were installed into the most popular Moscow intersections by communist police of that time, this building has been the surveillance centre. Years passed, and there were no more communists around, however the centre grew and got stronger. Now it is fully digital, of course. They can put anything on those large screens. Cameras on the streets, in the offices or even from the dash cams of police cars can be streamed to here in real time. These are the guys that work there. They say they don’t only get the images and streaming video from the cameras around the city, but they also track internet services that allow people to communicate with each other so that they can track dangerous situations in real time. It’s all public so why can’t they track them too? Maps, maps everywhere. Real time traffic control, all of the accidents are marked on the maps. If there is an accident there is for sure some camera around so we can see it. If there is no camera, then as soon as a police car arrives we can get the picture and video streamed from the car. Also unpaid tickets are more information that can be tracked for any driver. So when a patrol car pulls somebody over, they can detain him for unpaid tickets, etc, until he pays. Some cameras track visitors, for example visitors to police stations, etc. Those people in the picture track all of the visitors. Here is an example of tracking people in some governmental office. Some are birds-eye cameras installed on houses and buildings. Some are on the traffic lights, and more of them are installed in different places and different styles. Just imagine, over one hundred thirty thousand cams in the city to control. That’s a lot of live video. A lot of monitors are needed to control all of those cams.

What do they call it? Officially, this place is called a “Situational Control Centre”. So they control the situation and don’t hide it. How successful is the project? Dmitriy didn’t tell us.

9 thoughts on “Big Brother of Moscow”