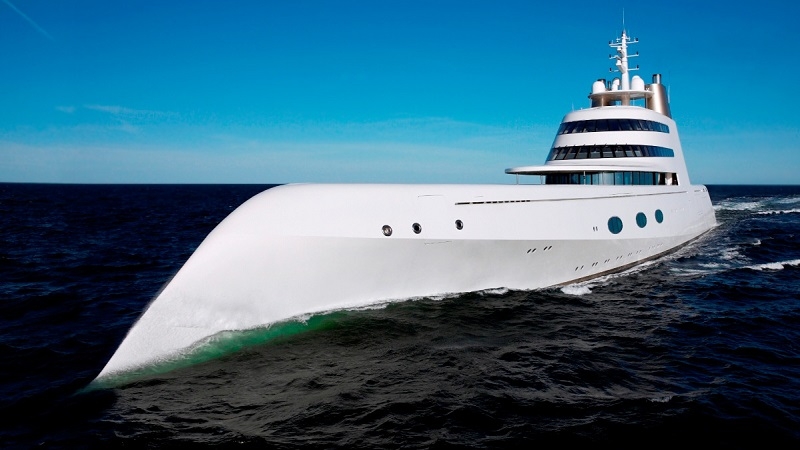 Equipped with three splendid pools and numerous wonderful trifles – this very expensive yacht belonging to a Russian oligarch, Andrey Melnichenko, is so awesome that Caligula himself would die of envy! Though it is named in a rather modest way, “A”.

The vehicle that sooner resembles a submarine than a posh liner cost 300 million dollars! This is how much Melnichenko paid for the sailing paradise, whose handles alone are estimated at 40 000 dollars. This would be enough to study for a couple of years at Harvard with the world’s best teachers… Andrey Melnichenko is a billionaire who gathered his wealth by himself – initially by creating a currency exchange network, later – by having bank, coal and fertilizer businesses.

His name was repeatedly mentioned in Forbes. In 2005, he married a Serbian model and pop-singer, Alexandra. The wedding was celebrated in the south of France. He has a lot of money, but he does not like to show off. Even this yacht does not have open decks. Buying such a boat didn’t leave a hole in the savings of Melnichenko because his savings amount to 11,5 billion dollars. Such capital would allow us to think that a touchscreen navigator, bullet-proof glass and a rotating bed are not luxuries at all. “A” has become very popular in the Internet – it has its own supporters and critics. Only a few people can enter the bedroom on the yacht – access is protected by a lock opened by a fingerprint. There is only one thing this family values more than their material wealth, it is a guarantee that their money will never be lost. The architect of the ship is Philippe Starck – it’s typically his style to use a lot of glass, lots of crystals and mirrors. The designer made a really luxurious interior. For example, one room has stingray skin covered walls, another one – walls covered by hand stitched calf leather.

The length of the yacht is 120 meters (could be compared with a football field and a basketball field located end to end). Handrails alone cost 60 thousand dollars. By the way, Melnichenko can have a helicopter on the yacht if he wants. Starck is a designer of thousands of projects – from furniture to cars and houses. In the world of architecture, he’s a legend. All his creations are focused on one basic philosophy – we should help other people make their lives as good as we can.

5 thoughts on “Yacht For the Russian Billionaire”