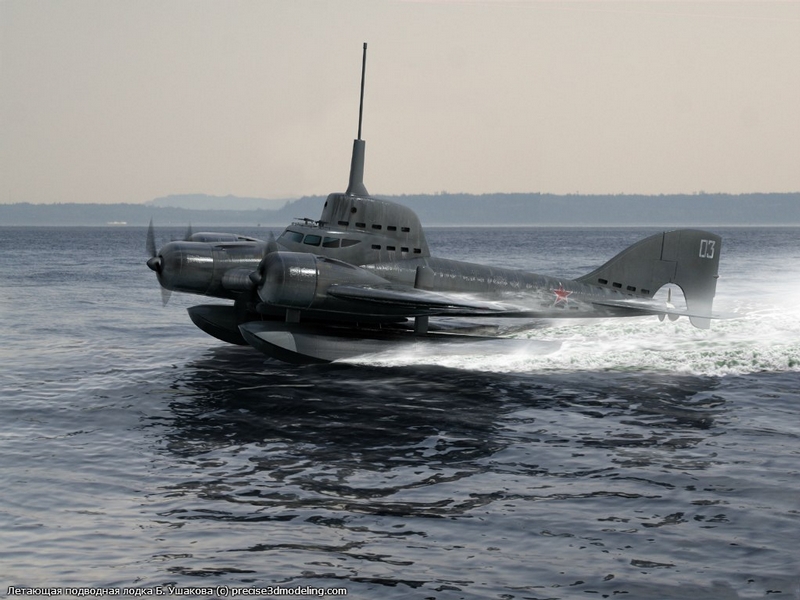 These images were created on the basis of a 3D-model of a unique Soviet project – a flying submarine! The project was born back in 1934. Its creator, Boris Ushakov, was a student of the Naval Engineering School. The subject of his coursework was a vehicle able to fly and swim under the water. In April 1936 the project was approved by the competent committee, who found the vehicle to be worth further realization. The author of the project, Boris Ushakov, was working on the project as an engineer and military technician in 1937-1938. The name of the vehicle was “Flying Submarine”. In other words, it was a plane able to submerge in the water. It underwent many modifications, in its latest version it represented a solid metal plane whose flying speed was 100 knots, speed under the water – about 3 knots.

The Flying Submarine was intended to be used to attack enemy ships. Supposedly, it had to determine the course of a ship, leave the visibility zone of that ship, submerge in the water, and attack it with torpedoes.

Besides, it could be used for overcoming enemy minefields around military bases and areas where enemy ships were sailing.

Unfortunately or fortunately, such a revolutionary project was never brought to life, in 1938 it was decided to wind down the work due to low mobility of the Flying Submarine under the water. The final statement read: when the Flying Submarine is noticed by the ship, the ship will change its course which will more probably lead to a mission failure because the combat properties of the submarine are not good enough under the water.

In fact the project was cancelled due to its high complexity and unrealistic realization which were repeatedly proved by multiple tests and calculations leading to another modification of the Flying Submarine. Ushakov wanted the vehicle to have six modules, three of them would be used for air-engines AM-34, 1000 hp each, the fourth module would be habitable and be used by the crew of three persons and vehicle control under the water. The fifth module would be intended for an accumulator battery, the sixth – for an electric motor for providing propulsion.

The fuselage of the flying submarine would be a cylindrical riveted construction made of duralumin 6 mm thick whose diameter would be 1,4 m.

The pilot’s cabin would be filled with water during submersion, so all the panels had to be in a special waterproof compartment. Fuel and oil would be stored in rubber tanks. Wing and tail coverings had to be made from steel, the pontoon – from duralumin. During submersion the wing, the tail and the pontoon would fill with water through special valves. Engines would be covered by special metal shields, inlet and outlet lines of the water system for engine cooling would be blocked to prevent their damage under the impact of pressure of outside water.

To prevent corrosion the Flying Submarine had to be painted and covered with special lacquer. Two 18″ torpedoes were secured on holders under the outer wings. The armament would be also represented by two coaxial guns for protection against enemy aviation.

Endurance distance under the water – 5-6 miles