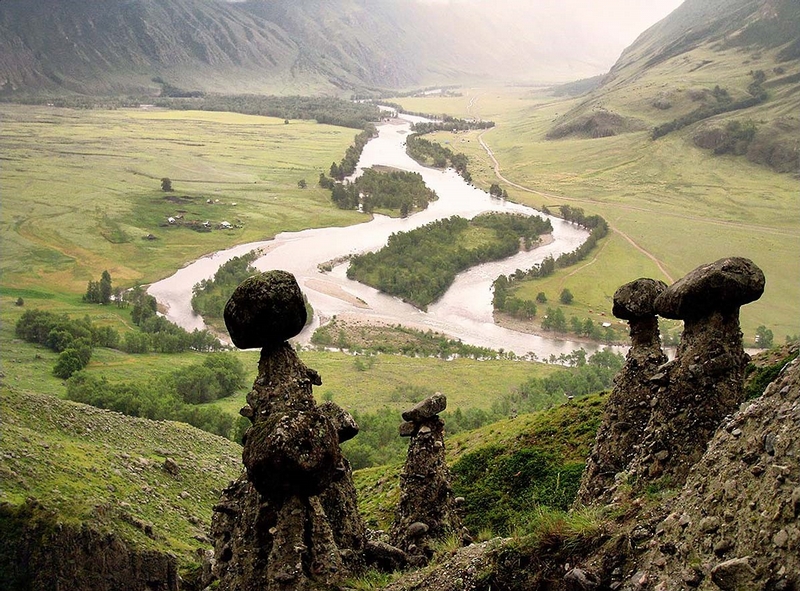 Akkurum is a mountain area in Altai, Russia, it has interesting stone formations that resemble mushrooms according to their shape. They are usually called “kurums” and consist of rock debris. Created by the wind on the slopes and at the foothills they moving slowly down those slopes. Stone mushrooms are formed by selective outwashing of rock formations, or scientifically speaking, by denudation. They grew like this: mushroom caps were formed by thick plates of conglomerate while the mushroom stems were formed by poorly consolidated sediment that was less resistant to disruption caused mainly by the water slowly flowing from the slopes.
The result of this process – giant figures resembling mushrooms. They are standing like this for hundreds of years but they are getting eroded, to be completely broken down and to vanish. One generation of the mushrooms is replaced by another but what’s more interesting, they continue to grow! The reason is the soil consist of clay and crushed stone. It’s solid when dry but being influenced by moisture it starts floating. At the end of the nineteenth century, the highest and one of the most beautiful mushrooms collapsed. Its cap is still lying there between other formations. In 2003, a series of earthquakes made many other mushrooms fall and break. The phenomenal natural creations are protected by the state – the valley of Sotera was declared a natural sanctuary in 1960, and since 1980 it has been a reserved mountain area. Local excursions are rather popular despite the fact that the place is rather hard to reach. By the way, the stone formations do not look good enough in photographs because they are standing in the shadow of a mountain. The best pictures can be taken at sunset or before 7 a.m. Similar stone formations can also be seen in the Crimea and in Ural. But these ones are more beautiful and unique due to the nature of their origin. Some locals believe when all the mushrooms fall, doomsday will come. 3 thoughts on “Stone Mushrooms of Altai”