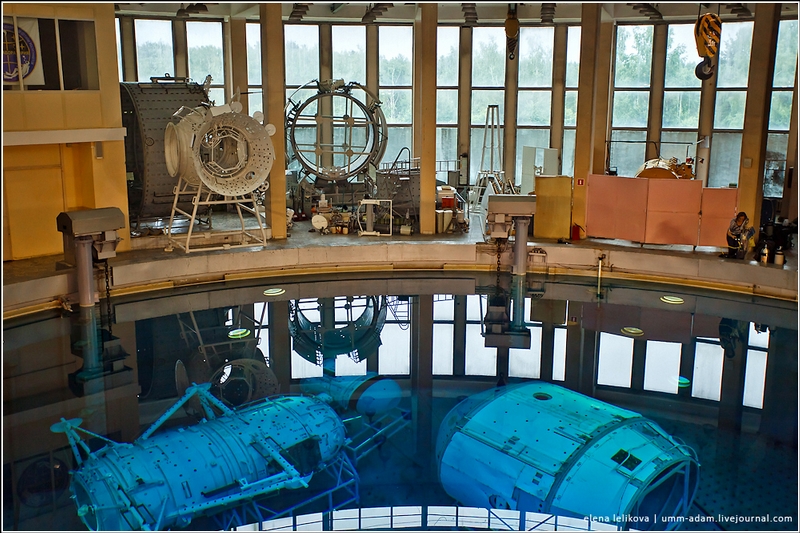 When cosmonauts work in space they work in a weightless environment. It goes without saying that they need to be prepared for such work. But how can it be done on Earth? It’s not as hard as it first seems. Conditions closest to weightlessness are provided by ordinary water. That is why in 1980 they built a water immersion facility in the Cosmonauts Training Center named after Yuri Gagarin. For the thirty years of its existence cosmonauts have spent over 65 000 training hours here, those who have subsequently walked in real space had the same opinion: it felt 95% the same. The water immersion facility is a complex hydrotechnical construction with a system of technological equipment, special instruments and mechanisms. It is mainly occupied by a huge reservoir: twenty three meters in diameter, about twelve meters deep. The reservoir is filled with water of unique composition whose temperature is about 30 C.

Inside the pool is a motion platform with a lifting capacity of forty tons. Interesting equipment models are secured on the platform: the Russian segment of the ISS, the space ship “Soyuz TMA”, etc.  During immersion cosmonauts use special diving suits connected to an external air source. Their work is hazardous, so they are always accompanied by scuba divers while they are under the water. In fact this water is almost distilled, there is no water with such a low density anywhere else. Powerful spotlights surround the pool from outside contributing to the feeling that you are in real space.

45 portholes along the perimeter of the pool are used for shooting and monitoring during the cosmonauts’ training. All of the facility is permanent, its iron is identical to real one – to every single nut and every millimeter. The platform used for briefing is the basic part of the ISS. This is a multifunctional laboratory module used for scientific experiments. It has not been in space yet but it will fly there soon. An air lock chamber which is also used for scientific experiments. A cosmonaut is lifted by a crane. ISS configuration. Maybe quite soon such modules will be assembled in orbit to avoid transportation of such a massive construction from the Earth. The service module where cosmonauts live and spend most of their time. The models are hollow inside. These yellow handrails help them to move around under the water. This is how everyone can see what a cosmonaut sees when in space. They train in space suits “Orlan-MK-GN” which are very heavy, a single compression of a glove is a 16 kg forced applied. How much effort should it take while they are moving along those handrails? And still they have a lot of work to do! How long do they work in space? 6 hours (soon they are going be able to work for 8 hours) in standard conditions. It requires serious psychological readiness. After three hours it is not simply hard to be in such a suit  – it already hurts! Of course, it’s made of iron. That’s why they have to be ready to overcome pain. On the screen is an image from the ISS. The facility is going to close for repair quite soon. No matter what some people think, the space industry still excites interest and many little girls and boys are still dreaming of becoming cosmonauts one day.