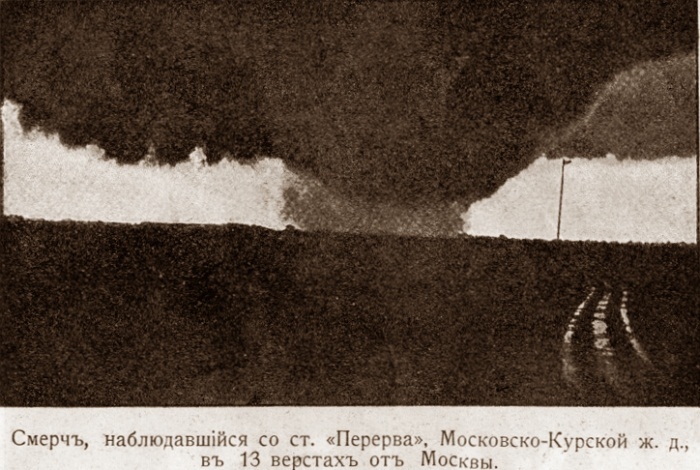 Tens or hundreds of houses were demolished, and train cars and carriages were thrown around. All of this was preceded by a hail storm with hail the size of goose eggs. The photo above might be the only photo of the actual hurricane pillar, however inside there are plenty of more photos of this natural event and its aftermath. They say that this church was the first building in the way of the hurricane, it got its roof and the crosses on top of the domes destroyed. Lyublino Moscow district – the park around the mansion was totally wrecked. A theater building nearby was also damaged. The local newspaper wrote the following:

“At around 4 p.m. the park of the Lyublino gradually ceased to exist as was witnessed by the people. The trees fell down, the roofs were removed from where they belonged, the Earth trembled.” The train station nearby was damaged. Six train cars were overturned. The thick trees had their trunks twisted by the power of the wind. This grove has never recovered. One of the Moscow palaces. Damaged. Then the hurricane got closer and closer to the centre of the city, getting closer to downtown. From the local news reports: “A policeman guarding the streets was lifted into the air and then thrown down on the ground, and went into hospital after that. The Lefortovo fire squad had noticed the tornado’s black pillar from far away and decided that it was a giant fire. They moved out to fight the fire but their fire cart was taken into the air and smashed. A few firemen were killed. A herd of cows was in a pasture nearby. A few of the cows were also lifted into the air and were flying around for some time, then thrown on the ground and killed, too. A herd’s shepherd was swept into the air as well, but later was thrown into a tree where he managed to hang on and thanks to this he wasn’t killed.” The wreck of a famous Moscow restaurant. Not the one we published a few days ago. A guy posing amid the wreckage might be the owner. This is a map of Moscow and the path the tornado took that day, June 29th 1904, exactly 110 years ago. Probably, if something like this happened now, much more damage and many more casualties might occur as the area is much more densely populated and developed. However, the climate changes of recent times indicate that weather conditions are much milder than before, which might be the reason there has not been something similar to this for the past hundred years in Moscow or any of the surrounding cities.