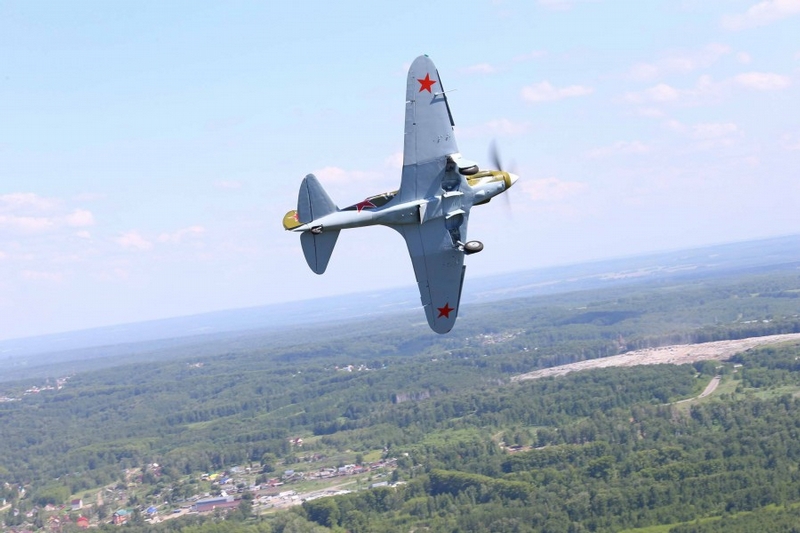 Remember how we showed you a WW2 tank that they pulled out of the river? Yes, that was their fifty-fifth operation of pulling large WW2 machinery from the bottom of Russian rivers and lakes. However this is something different – this time another group of enthusiasts have pulled a real WW2 plane out of the lake and fully repaired it so that the plane that you can see in the air in the picture above is a real WW2 plane they recovered.

The group of people went to the no man’s land in distant parts of Russia and pulled the old war plane from the bottom of a lake which didn’t belong to anybody, then restored it investing some of their resources, and ultimately got a free plane!

See how those Red star wings looked when they were freshly recovered from the lake mud. I find it interesting how they pull them out –  they put car tires on the wings and around the body of the plane, then inflate them so that the plane rises up from the bottom. See it here: This particular plane was found in the Murmansk region, the northern part of which is close to Finland and Norway. Here are those inner car tires on the wings. As soon as they raised the plane they use pressurized water to remove the lake mud from the body. They say that the plane starts rusting as soon as it gets into the open air. The truck takes the plane to the train station where it is loaded onto the train car and destined to travel a few thousand kilometers to the Siberian city of Novosibirsk. There, in a special factory, the plane is going to be restored and turned into a flight legal machine. And rebuilt. It might take a few months to finish this job! Everything looks like new! There is a shot of the same cockpit when it was fresh out of the water, you can compare to its new look now. Finally, putting wings back on the plane. And getting the plane out to the street for the first time. After everything is checked and painted the plane is ready for its first flight. The first time since it was shot down tens of years ago, back in WW2. Here we go! By the way, this is a MiG plane. And thanks to the Boris Osetinsky for the photos. Boris is a manager of the company that makes all this possible!