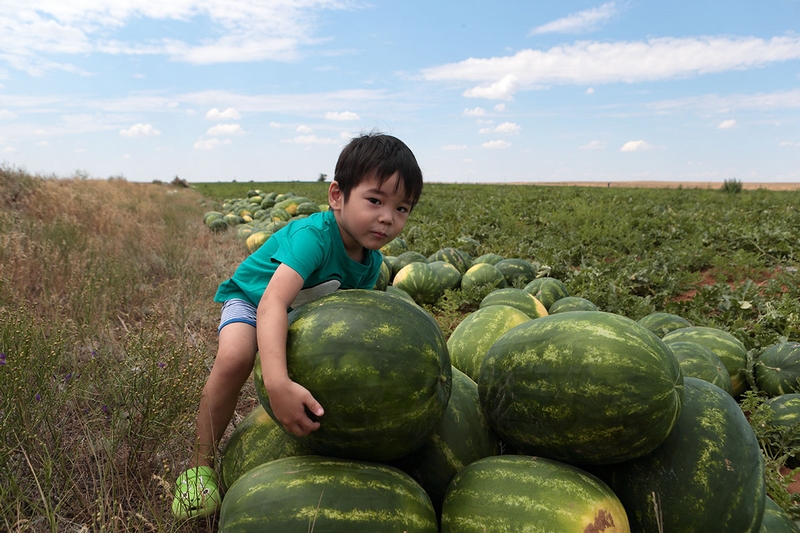 Not all of the watermelons in Russia are imported from Mexico. In fact, I doubt that any of them are from Mexico at all, most come from the Southern ex-Soviet states, some from Turkey and Israel, and Spain is a large exporter of fruit to Russia as well.

However, there is a traditional source of Russian made watermelons as well. The Astrakhan region of Russia was known for its watermelon harvest well before Communism, serving the old Russia with this fruit in summer. Then through the USSR era, when the import of watermelons was not very popular, Astrakhan together with Southern republics served big red berries to the tables of the Soviet working class. Now the tradition is still being observed, and sometimes preference is given for the “local” Russian or Astrakhanian watermelons over the “imported” fruit. Last week they officially started harvesting them. Here are a few shots of how its being done made by Yevgeny P. The watermelons ripened even earlier than the open air tomatoes. The harvest of the tomatoes is expected to start later this week. In their natural habitat. And these are bell peppers. They are not quite ready yet, Evgeny says they will be ready in a week. One thing that may be common between these watermelons and those that are in America is that both are being harvested with the help of foreign migrant labor. These are the people growing and harvesting the treats. And here we can see some end user consumers. Thing look similar in different parts of the world, and this watermelon looks sweet. Thanks to Evgeny for the photos.

1 thought on “Russian Harvest of Watermelons”