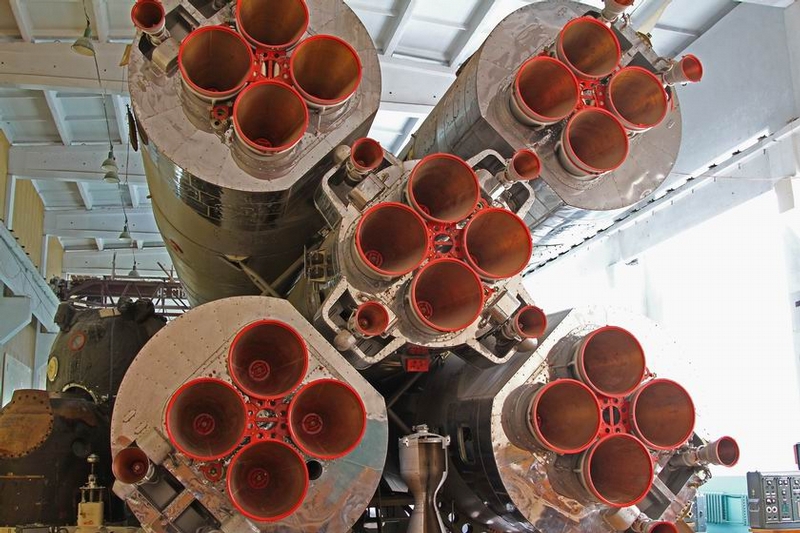 Moscow is not even close to the places where the most Russian space launches are being performed. However, Moscow has a bunch of scientific research centers and universities which contribute to the technology, so there is a place in Moscow where real life rocket engines are stored, right in the university. This is a post of a trip to such a place which Svetlana (the author) made on a day known as “Cosmanautics Day” in Russia. This place is not a museum and generally is not open to the public. Special permission is needed to obtain a ticket there. This lab hosts a few rockets. These are not copies of the rockets, not dummy models, but are real life rockets and their engines. This one is an R-7 rocket. Svetlana says that exactly this model rocket carried the first satellite “Sputnik” into its flight in space. She says that it is being used even now, probably in a different modification, but the base stays the same. A space rocket that took into space many legendary Soviet and Russian cosmonauts and satellites can be seen in this lab in particular detail dissected for your viewing pleasure inside the post. Near the rocket there is a part of its jet chamber where the fuel gets burned. Svetlana says that the chamber is made in such way that the fuel is burned there as fast as possible to create the biggest possible jet propulsion. The small holes are the nozzles used to spray in oxidants and fuels under high pressure. They come inside as small drops and burn when they are mixed up. The most narrow part of the chamber is where the maximum speed of the fuel is reached – in theory, she says, the speed is equal to speed of sound. The burning chamber walls are doubled and a coolant runs inside so as not to allow burning fuel to burn holes in the chamber walls. This rocket is two-stage rocket, but it’s called “packet two-stage” – the engines of both stages are placed together. And this is the same rocket engine but seen from another side. That round thing on top of the tunnel tube that connects the oxidant tanks with liquid oxygen and the engines is a manhole. Now you can understand the size of the structure. Another view of the rocket. And these are the “brains” of the set up. These devices control the R-7 rocket from within their special encasement. Can you see a “stick” in the centre of the device section? This is a “pusher”, a thing that puches the actual payload, a spaceship or a satellite, into space when they reach the correct altitude. The “brains” are doomed to go down through the atmosphere and burn up. This is an example of what was used as a payload. An interplanetary research station “2MV” – could be used to conduct research on Venus or on Mars. And it had its own personal engine to be able to maneuver in open space.

Here Svetlana stops posting her photos from the trip, saying that it’s the end of part one and soon we will see part two, which she promises to be even more interesting.

1 thought on “Trip to a Research Lab in Moscow with Real Space Rockets, part 1”