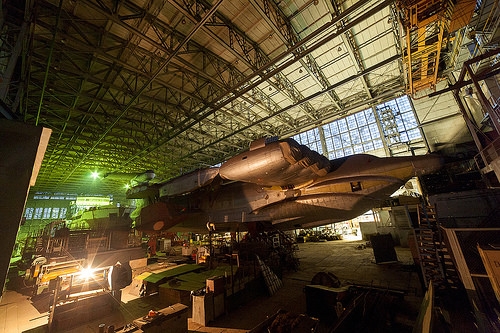 We’ve mentioned a few Ekranoplans on ER before. And frankly, I thought most of those vehicles that were built to fly very low above the surface of the Earth were discontinued and abandoned. However, it seems that there are a few, or at least one, that can be met deep in the warehouses of large factories that have never surfaced and never had a flight. Here is one of them – the Ekranoplan “Spasatel” or “The Rescuer”. It was found by a group of enthusiasts in the docking facility where for decades the ships were built – first in Soviet Russia, later in modern Russia. The dock is a pretty large site, as it can host larger boats whole. But besides the boats, the explorers managed to find something else.. That was a real Ekranoplan from the Soviet times. The guys say that Ekranoplans were planned to be used widely by Soviet military commanders, they wanted tens of such machines, armed with guns and anti boat missiles. However, only a few were actually built. This particular Ekranoplan was also built for military use, however later they tried to change its profile for civil use. That’s where it got it’s name. The ship has got eight (!) turbo jet engines. It was planned to be used on shipwreck sites for bring life boats on its wings for rescuing people. Also, there is a place for doctors and medical equipment on board. However, it never had its first flight, it stays here in a preserved condition, with some parts of the vehicle dismounted. The photographers say that it might be moved to a museum one day, however as of now those who want to take a look at this Ekranoplan have got to sneak illegally into this dock. 2 thoughts on “Sneaking to the Unknown Ekranoplan”