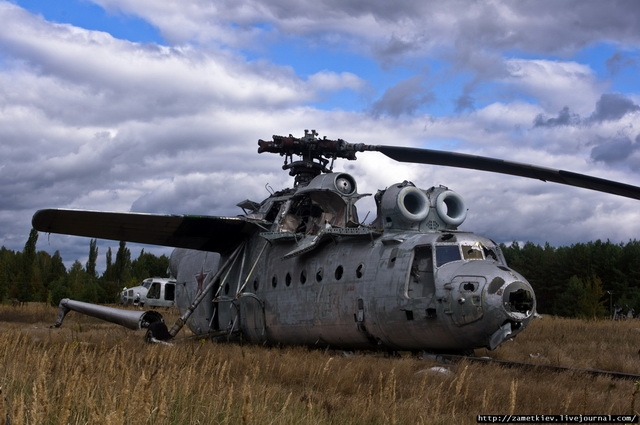 “Rassokha” is the storage area for vehicles contaminated by radiation, that were used by liquidators after the accident in Chernobyl’s nuclear power plant. It is located in the 30-kilometer exclusion zone near an abandoned village with the same name. A BRDM is an armored reconnaissance and patrol vehicle.  It was actively used after the accident. The armor reduced the level of gamma radiation. It  was also equipped with a built-in radiometer. Typically, such vehicles were used for radiation detection and level measurements on the ground. It could swim in the water. There were 6 such helicopters. A heavy engineering vehicle.
In 1986-1987 these monsters were irreplaceable. The thick armor protected against radiation while they they were cutting down a “Red Forest”.  Many villages were buried by them. The remains of a GAZ-66 “Shishiga” A path goes to the nearest residential village, from where citizens carried on their illegal business in “Rassokha” for years. They were stealing metal to earn a penny for food and vodka … This is how the storage area looked 20 years ago.