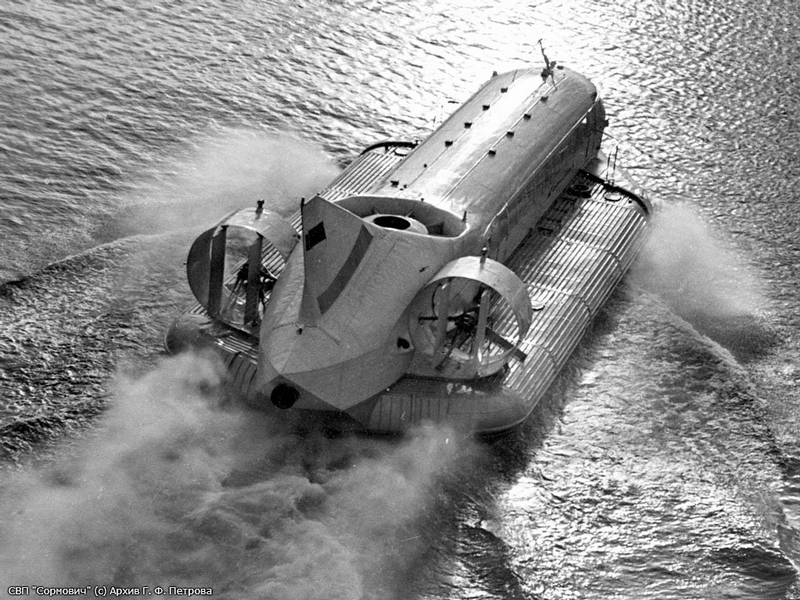 Water resistance is the main problem to overcome to increase the maximum speed of a ship. That is why hydrofoils and hovercrafts have appeared. An unlimited navigation season and high speed are the main advantages of a hovercraft that can move in summer and in winter alike. But also it has one big disadvantage. That is a fuel consumption due to the necessity of powerful engines for pumping air into the air cushion . The gas-turbine hovercraft “Sormovich” was built in 1965. During the tests the “Sormovich” reached the speed of 120 km / h, and flew above the surface of the earth at a height of 0.25 – 0.3 m, it easily overcame the shallow water and came gently onto the beach. After successful testing, the hovercraft  “Sormovich” was put into service as passenger transportation. The cruising range was about 600 km. The ship had a crew of 3 people and could carry up to 50 passengers. A passenger lounge for 50 people was placed at the bow. The “Sormovich” was put on an experimental passenger route between Gorky and Cheboksary, which was 274 km in length, along the Volga River. A round trip from Gorky to Cheboksary took one day. This line worked only in 1971 and 1972. Operation was complicated by problems with the dispensing gear that failed. According to the statistics, the “Sormovich” served about 6,000 passengers. The reason for the decision was unclear, as the ship was designed to operate in the winter months. Perhaps it was connected with the almost completely absent infrastructure for winter navigation on the Volga river. The gas-turbine hovercraft was decommissioned in 1974. The “Sormovich” met its end on the base in the Gorky Region. There it was brought to a state of complete disrepair, then it was cut into pieces of lifeless metal.

2 thoughts on “A Passenger Hovercraft from the Soviet Times”