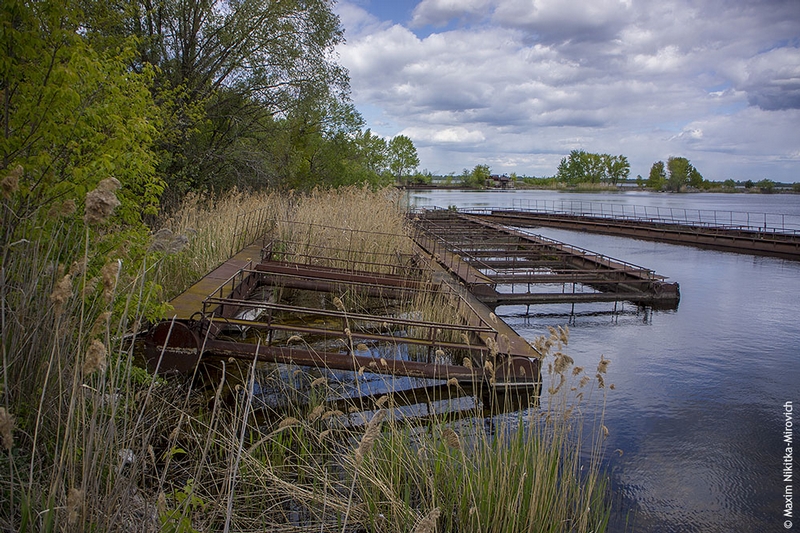 If you ever go to Chernobyl, you can ask an accompanying guide to show you an unusual and rather interesting scientific object – the hydrobiologists base, which was functioning until 2008 – for more than 20 years after the accident. Before the accident in 1986, it was a fish farm consisting of two buildings – the laboratory-household building and the hatchery where they were breeding fish. Housing was abandoned recently – everything is in a fairly good condition. The entrance is entwined with a grape vine. The interior of laboratory-household building. Rooms. The right one is a kitchen. In the 90’s the base belonged to the Chernobyl Centre for International Studies, in 2000 – the Chernobyl radio-ecological center. Over time, the amount of research and work was reduced, and eventually the base was mothballed in 2008. The remains of a gas stove in the kitchen.There was no hot water or heating in the building – despite the fact that it was used in the “uninterrupted” mode – a group of scientists lived here for several weeks. Drinking water was brought to the base in cans and the problem of heating was overcome with the installation of two electric heaters. The laboratory facilities. Tools and equipment were taken out by the scientists, the rest finished off by looters. There only toilet in the base. The second building of the complex is the hatchery. Before the accident, they were growing fish, and after the accident – there were scientific experiments on farmed fish, and they also studied the cooling pond ecosystem. The lighting was repaired recently, with the help of modern scotch tape. On the walls there are pictures of various fish species. Near the buildings there is the Nuclear Power Plant’s cooling pond. The pond is large enough and there are too many fish. A large school of juveniles is directly visible from the shore.