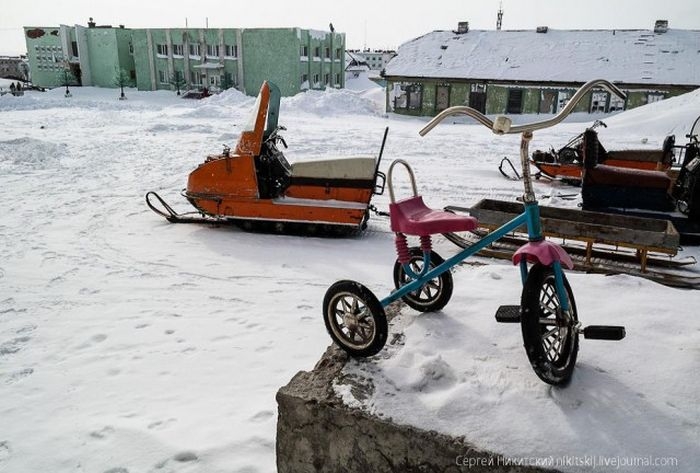 Dikson is the most northern port in Russia and one of the northernmost settlements in the world. It is located so far north that one may experience complete darkness with no civil twilight from the 8th of December to the 5th of January. In most of major settlements north of the Arctic Circle, there is still substantial twilight during the polar night at midday. It is also one of the most isolated settlements in the world. The village was named after a Swedish explorer.

Dikson’s inhabitants informally call their settlement the “Capital of the Arctic”, a name taken from a popular Soviet song.

Common citizens of Russia can’t go there without a special pass. The easiest way to travel to Dikson is by helicopter. The most common transport is a cross-country vehicle. The body is made of fiberglass, so has very low thermal conductivity and has the
ability to operate in a temperature range of – 45 ° C to + 45 ° C. The capacity of the passenger models – 8 people. An old modification of TRACKOL was based on UAZ. Inside an old TRACKOL cabin. An old soviet snowmobile “Buran”, which has been made for centuries. There is no stealing in the village, the population is about 500 people. There are a lot of abandoned vehicles on the background. Modified sled for use in the Arctic.